After rising through Wednesday, stocks retreated in the final two trading days of the week, with the Dow Jones Industrial Average (DJINDICES:^DJI) managing a meager 0.33% gain. The S&P 500 (SNPINDEX:^GSPC) closed the week 0.15% lower. 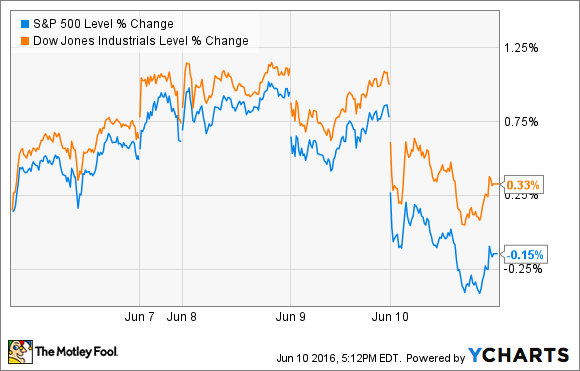 The driving force behind the late-week decline seemed to be investor anxiety surrounding a vote that could see the U.K. leave the European Union, combined with a drop in oil prices. These two headlines were enough to send the global markets into a small sell-off Friday. Here are a few stocks making major moves or headlines this week.

Restoration Hardware Holdings, Inc.'s (NYSE:RH) investors were hit hard as the stock got pummeled this week, declining more than 20% after it posted another disappointing earnings report. While the first quarter is seasonally slow for the company, its surprise loss of $0.05 per share fell short of analysts' expectations of $0.05 per-share profit. Worse yet, it was a large decline when compared to last year's first-quarter result of $0.23 per share.

In addition to earnings checking in lower than expected, revenue increased 8%, with comparable sales moving 4% higher. This generally would be a silver lining for investors, but the expectations for those metrics were higher, as well. Management was quick to point to headwinds caused by the negative impact of energy and currency on the markets, but also internal issues with supply-chain problems.

Restoration Hardware's stock price has dropped 66% in 2016 alone, and value investors looking to swoop in should weigh the risks and rewards. The company has major strategies hanging in the wind, such as launching RH Modern, and moving from a promotional to a membership-selling model using the RH Grey Card.

On the flip side, investors in LDR Holding Corp. (NASDAQ: LDRH) are having a fantastic week after the medical-device company, which focuses on treatment of spinal disorders, announced that it's being acquired by Zimmer Biomet Holdings (NYSE:ZBH). Looking at the details, Zimmer Biomet put a $1 billion offer on the table to acquire LDR in an all-cash deal. That offer values the shares at $37 each, which was a hefty premium to the stock's closing price on Monday -- hence, the 67% jump for the week.

"This highly strategic and complementary transaction will enhance Zimmer Biomet's innovation leadership in musculoskeletal healthcare by adding a premier spine platform to our portfolio of solutions," said Zimmer Biomet CEO David Dvorak, in a press release.

The deal is expected to close in the third quarter of 2016, and Zimmer Biomet expects the acquisition to accelerate the future growth of its total business. Management will update its revenue guidance to reflect the acquisition when the deal closes. While the revenue will be adjusted, investors should temper expectations for incremental earnings per share from the deal -- at least for this year -- as it's expected to be neutral to the bottom line this year, and accretive to EPS in 2017 and thereafter.

Lastly, making headlines late in the trading week was Tesla Motors (NASDAQ:TSLA), and not for good reasons. The Daily Kanban broke the news, and reported that, in three instances, Tesla owners were at least asked by Tesla to sign "goodwill agreements," often in return for covering out-of-warranty repair costs on some vehicles. The Daily Kanban's post notes that reports on forums have circulated for months about a potential defect in Tesla's suspension, which may cause the suspension control arms to break.

"The agency immediately informed Tesla that any language implying that consumers should not contact the agency regarding safety concerns is unacceptable, and NHTSA expects Tesla to eliminate any such language," said NHTSA spokesman Bryan Thomas, according to Automotive News. Tesla responded late Thursday, giving its side of the situation.

"There is no safety defect with the suspensions in either the Model S or Model X," the company said in a blog post. "On rare occasions when repairs are discounted or conducted for free, customers are asked to sign a "goodwill agreement," Tesla's response continued. "The basic point is to ensure that Tesla doesn't do a good deed, only to have that used against us in court for further gain."

On one hand, an agreement such as this is uncommon in the automotive industry, and rumors of a potential cover-up have fired up across the Internet -- which should initially be taken with a grain of salt in these situations. On the other hand, if there have been injuries or deaths due to the suspension issues, this is a development Tesla investors will want to watch, because it could have serious brand-image and financial impacts.