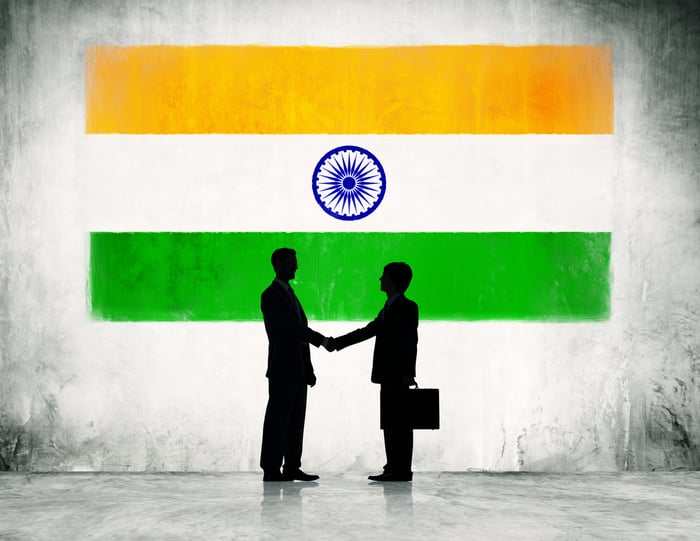 The company's cloud-based Amazon Web services is growing at a rapid clip and was the largest contributor to operating income in the latest quarter. North America retail is firing on all cylinders as well, posting a 27% year-over-year revenue increase and 131% operating income growth.

However, it would be wrong to say that all of Amazon is firing on all cylinders. Amazon's international segment continues to struggle to post a profit. Although the segment's revenue increased at a healthy clip, posting a 24% year-over-year gain in the first quarter, Amazon's foreign operations are still unprofitable. Normal businessmen would curtail International investment in order to improve their profitability. However, Amazon's Jeff Bezos is no normal CEO.

Doubling down in the world's fastest-growing country

As reported by The Wall Street Journal, Amazon plans to invest an additional $3 billion in India. Including the $2 billion the company spent in 2014, the newly announced figure brings Amazon's total investment in the country to $5 billion.

India's Prime Minister Narendra Modi has embarked on a series of market-oriented reforms and it appears to be working. In 2015, India drew record foreign direct investment. After nearly a decade of China doing the heavy lifting for the global economy, the World Bank now projects India to be the fastest-growing economy this year with 7.8% GDP growth.

China has been heavily covered by the American press, but perhaps India is a better country for expansion. While both countries have higher-than-average GDP growth and large populations, India's economy has less government intrusion into the private sector, a capitalistic framework, and more respect for intellectual property than its larger Asian cohort.

Amazon is patient, so investors should be as well

Amazon's investment in the country is unlikely to translate into profits anytime soon. As previously stated, the company's international segment remains unprofitable. Additionally, Amazon generates the vast majority of the unit's revenue, over 80%, from just three countries: Germany, the United Kingdom, and Japan. In the short run, these developed countries with high GDP per capita figures will continue to provide the bulk of Amazon's International sales.

India is still a developing country. Last year, Indians purchased only $16 billion of goods online, according to data from Morgan Stanley. As a comparison, the United States, a country with a population approximately a quarter of India's, spent a cumulative $342 billion online in 2015 according to the U.S. Department of Commerce. But Amazon investors should focus on India's growth potential: Indians only purchased $6.3 billion in the prior year, which represents 154% growth, more than ten-fold the U.S. 15% e-commerce growth rate.

There's a huge opportunity for Amazon in the country, but investors should be patient like Amazon's Jeff Bezos.