What: Shares of network security company Palo Alto Networks (NASDAQ:PANW) slumped 13.5% in May, according to data provided by S&P Global Market Intelligence. The company's fiscal third-quarter report on May 26 was largely positive, but a widening GAAP loss and underwhelming guidance sent the stock tumbling.

So what: Palo Alto reported quarterly revenue of $345.8 million, up 48% year over year and about $6 million higher than the average analyst estimate. Billings grew at an even higher rate, rising 61% year over year to $486.2 million. Palo Alto CFO Steffan Tomlinson pointed to strong demand for the company's products. "Robust new customer additions and expansion in existing accounts resulted in market-leading, year-over-year growth as customers increased their investments in our Next-Generation Security Platform, with particular strength in our subscription services."

On a non-GAAP basis, Palo Alto reported earnings of $38.5 million, or $0.42 per share. That's up from $0.23 per share during the prior-year period and in line with analyst expectations. On a GAAP basis, the company remains extremely unprofitable, with a loss of $70.2 million during the quarter. That's far worse than a loss of $45.9 million during the same period last year. Stock-based compensation is the main reason for the discrepancy.

In addition to reporting a larger GAAP loss, Palo Alto's guidance was nothing to write home about. The company expects revenue between $386 million and $390 million during the fourth quarter, up 36% to 37% year over year. Non-GAAP EPS are expected between $0.48 and $0.50. Both are in line with analyst expectations, but investors may have been hoping for better guidance from the company.

Now what: Palo Alto Networks is an expensive stock, trading for nearly 10 times trailing-12-month sales. Over the past year, the stock has been extremely volatile, a hallmark of high-flying stocks like Palo Alto. 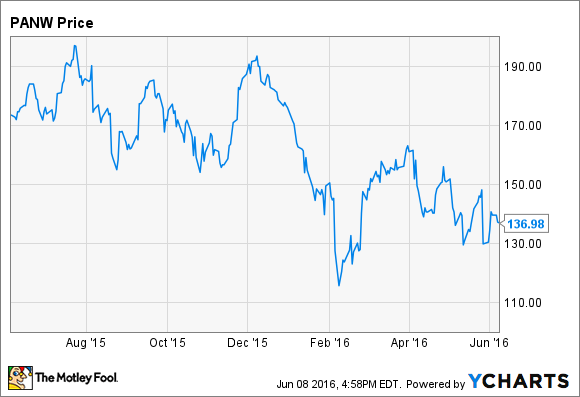 The company remains unprofitable, and while it is producing positive free cash flow, stock-based compensation and a growing deferred revenue balance are the driving forces. Palo Alto's free cash flow really shouldn't be viewed as a measure of profitability.

Palo Alto's revenue guidance called for a slowdown during the fourth quarter, which no doubt concerned investors and analysts. Following the company's earnings report, a slew of analyst price target cuts rained down on the stock, although most analysts still rate it as a "buy." Going forward, Palo Alto will need to maintain rapid growth to keep investors happy. That becomes harder as the company grows larger.