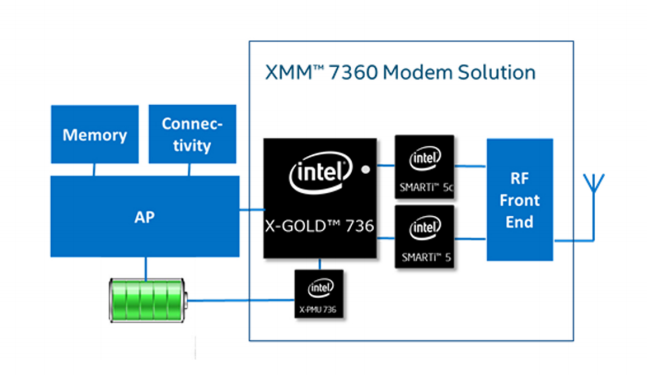 A number of reports claim that microprocessor giant Intel (NASDAQ:INTC), a company that has long struggled to gain traction in the market for mobile chips, has finally won a high-profile spot inside Apple's (NASDAQ:AAPL) next iPhone.

Given that Intel appears to have canned the development of chips that integrate both an applications processor and a modem on the same piece of silicon, the only smartphone that Intel can realistically win at this point is the iPhone (which uses stand-alone modems).

The modem that Intel is expected to supply in the next iPhone is known as the XMM 7360, a product designed by Intel but manufactured by a third-party foundry (likely TSMC (NYSE:TSM)) on a mature 28-nanometer manufacturing technology.

Although it is expected that Intel will build future stand-alone modems in its own factories, I'm not convinced that this is a good idea, at least over the next few product cycles. Here's why.

Intel has never successfully shipped a modem on its own technology

Intel purchased Infineon Wireless back in 2010 in order to get into the 3G/4G modem game. Since then, the company has released a series of cellular modems. These modems have all been manufactured by third parties (likely TSMC (NYSE:TSM)) on relatively mature technologies.

That's not to say that it hasn't tried. At its 2012 investor meeting, Intel mentioned a part codenamed "6331," which was expected to include "highly integrated capabilities" and would be manufactured on the company's 22-nanometer FinFET technology.

Then, in 2013, Intel said that it would release parts in 2014/2015 called SoFIA ("Smart or Feature Phone on Intel Architecture"). The first would come with a 3G modem, and the second would come with an LTE modem. These would, of course, be manufactured by a third party.

The plan that Intel communicated at the time was that the follow-on to the 2015 SoFIA LTE part would be built on Intel's own 14-nanometer technology. 14-nanometer follow-on was originally supposed to come in late 2015/early 2016, then it was slipped into late 2016, and then into the second half of 2017.

It seems that whenever Intel tries to build a modem on its own technology, the product is delayed so much that it makes more sense to kill the project than to bring it to market.

With Apple on board, why risk it?

If the reports are true that Apple is using Intel's modems in the iPhone, then I suspect that as long as Intel can deliver competitive products in a timely fashion, it should be able to continue to fight for -- and win -- share in future iPhones.

However, if Intel slips and isn't able to deliver product to Apple in a future product cycle, it might be dropped from future iPhones.

This would require additional financial investment (and Intel seems to be interested in cutting operating expenses at this point), but it would be a good way to get Intel proficient in building modems on its own technology while not putting its apparent relationship with Apple in jeopardy.