There are plenty of bargains available in the stock market for those willing to spend some time looking. It's easy to simply buy what everyone else seems to be buying, but producing above-average returns requires investors to find value in areas that most people ignore. The best time to purchase a particular stock is often when few investors are willing to do so.

We asked three of our Fool contributors to each come up with a stock that's currently trading at a major discount to its fair value. Here's what they had to say.

Tim Green: General Motors (NYSE:GM) is a stock that looks incredibly cheap. GM stock trades for just 5.5 times the low end of the company's earnings guidance for 2016, and a 5.25% dividend yield appears almost too good to be true.

Investors are no doubt concerned about how GM will perform if demand for automobiles weakens. The last time demand slumped, during the financial crisis, the entire automotive industry in the United States nearly collapsed. The old GM was put through bankruptcy, and the new GM emerged with the help of a government bailout. For a time, the company was jokingly referred to as "Government Motors."

The GM of today is leaner and more efficient than the old GM. In an interview with Bloomberg earlier this month, CEO Mary Barra disclosed that the company was capable of breaking even if U.S. vehicle sales fell to a range of 10 million to 11 million annually. About 17.5 million vehicles were sold during 2015.

There's no question that GM's earnings will decline during a period of weak demand. But for GM to post massive losses would require an extremely severe downturn. GM's earnings may be close to peaking, but with a mid-single-digit price-to-earnings ratio, I think that the pessimism surrounding GM has been taken way too far.

Brian Feroldi: Optical equipment maker Infinera (NASDAQ:INFN) has had a rough 2016. Shares plunged 26% in April alone and are currently down more than 30% year to date. A sell-off of that magnitude might have you believing that the company's business model is broken, but a closer look at its first-quarter results tells a different story. Revenue jumped 31% to $245 million and gross margins expanded to 50.2%, up 240 basis points over the year-ago period. That allowed the company's non-GAAP earnings per share to rise a strong 19%.

Management credits this strong growth to the rapid adoption of cloud computing and 4k video, both of which are bandwidth hogs. That's forcing internet providers to continually invest in their networks to keep up with the rising demand, and Infinera is greatly benefiting from that trend. Better yet, the company's growth is far outpacing that of the overall industry, which means that Infinera is successfully taking market share away from incumbent players.

So why has the stock tanked? Blame it on next quarter's guidance. Management is calling for revenue growth of 23%, a strong growth rate in absolute terms but it represents a deceleration from last quarter's growth. Margins are also expected to contract slightly, causing earnings guidance to come in short of investors' expectations.

I'm a firm believer that these short-term issues and that the long-term bull case for Infinera's stock remain intact. With shares trading for around 14 times next year's profit estimates and a projected long-term growth rate above 17%, I think this company's stock is a bargain.

Tyler Crowe: Even though shares of Helmerich & Payne (NYSE:HP) have rallied a bit since February, that doesn't mean the stock isn't severely beaten down. If we backtrack to when oil prices started to decline two years ago, then the company's stock is still down more than 40% since. 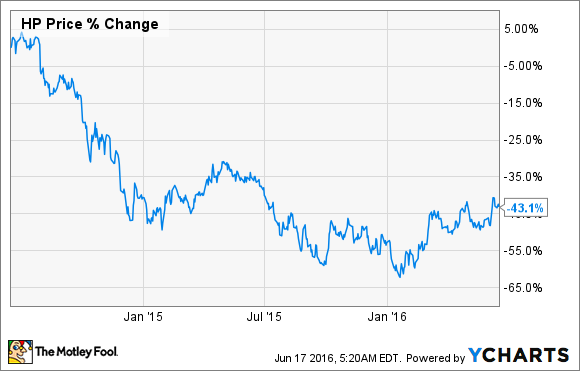 Probably the only thing that has been hammered more than Helmerich & Payne's stock has been its business of contracting out its fleet of drilling rigs. The active rig count is at its lowest point ever since we figured out we could drill for oil, and so there aren't a lot of rigs in Helmerich & Payne's fleet out there making money.

Here's the bright side of the equation, though. According to management, Helmerich & Payne has started to get more and more inquiries from producers about using a rig now that oil has remained rather consistently above $45 per barrel, and it's highly likely that shale drilling will be the one place that will see a rapid increase in drilling activity.

What makes Helmerich & Payne so compelling compared to rig contractors is that it has maintained a pristine balance sheet throughout this downturn, and its fleet of modern rigs are much more capable of doing the complex drilling jobs for shale. It's that prudent management of fleet and finances that has allowed the company to continually raise its dividend for 43 years now.

The oil downturn may not be over yet, but getting into shares of Helmerich & Payne today should be well worth it down the road.