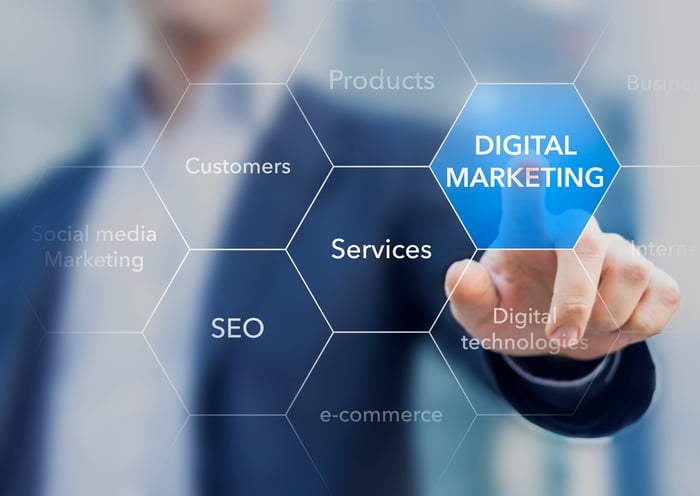 Marketing is an essential function of every business, and as a result, it has become an important industry in its own right. In 2015, eMarketer estimated advertisers spent nearly $600 billion in global ad spend, a 6% increase over 2014. To put that in perspective, it more than doubled the World Bank's worldwide GDP growth figure last year of 2.4%.

Every year, the Pew Research Center issues its State of the News Media report focusing on news trends in the United States, where nearly one-third of global advertising dollars are spent. At first glance, it may seem like the report has little to do with the marketing industry, but when you consider that the news industry is heavily funded by advertising revenue, the connection becomes clear.

The broad trends in Pew's report are good news for Facebook (NASDAQ:FB) and Alphabet (NASDAQ:GOOG) (NASDAQ:GOOGL).

It should come as no surprise that the newspaper industry is in trouble. The proliferation of digital outlets has hurt print circulation, and most newspapers were slow and reluctant to build out their digital circulation to compete. Per Pew's survey, weekday print decreased 9% in 2015. Including both print and digital, weekday circulation fell 7%, the most since 2010.

It makes since that advertising revenue would fall as well. Pew reports the figure fell 8% last year.

Newspapers are struggling, but there are a few exceptions. Most notably The Washington Post: After Amazon's Jeff Bezos purchased the paper, it has focused on increasing its total digital audience rather than paper circulation. In December, the Post recorded 76 million digital monthly users, nearly 50% higher than August's 52 million figure, with the company recording gains every month.

On the other hand, cable news had a great year. Cable TV primetime news increased its average viewing audience 8% last year, most likely due to the political campaign and specifically the increase of viewers from bombastic presumptive Republican nominee Donald Trump. Fox News, CNN, and MSNBC increased the collective advertising revenues 10% in 2014 over last year's totals.

Cable news remains an anomaly in the television universe, though; eMarketer expects total TV advertising revenue to grow only 2.5% this year, and for it to be overtaken by digital advertising in 2017.

A big disconnect in digital advertising

Pew's report continues to show a shift in advertisement to digital outlets. Overall, U.S. digital ad revenue grew 20% last year to nearly $60 billion in ad spend. Even more encouraging for companies in the digital-marketing space, last year's growth rate is higher than the three-year average growth rate of 15.8% from 2011-2014. As a result of this growth, digital now accounts for one-third of total ad spend versus 28% last year.

Naturally, you'd expect digital publishers to flourish in this environment. However, a recent article in The New York Times described the industry as in a "borderline panic." Technology writer Om Malik described digital publishing as being in "a very dangerous time." Malik's site, Gigaom, folded last year even during this ad-revenue bonanza. Pew's report outlines this huge disconnect: A mere five companies account for the majority of the digital advertising market.

The proliferation of ad-blocking software is one reason for the disconnect between Pew's data and the downbeat outlook within the industry. Even as advertisers are throwing more money at digital ads, this new technology makes it harder for online publishers to monetize their content.

Another reason for digital publishers to be concerned for their futures is because advertising dollars have shifted away from websites and more to the hosting platforms. In that same Times article, Morgan Stanley analyst Brian Nowak estimated $0.85 of every new dollar spent on online advertising in the first quarter of 2016 went to just two companies: Facebook and Alphabet.

With both Alphabet's Accelerated Mobile Pages, or AMP, and Facebook's Instant Articles format, both companies have imposed advertising restrictions on publishers in exchange for preferential treatment regarding distribution and search results. If anything, this shows the tremendous power of these platforms.

If Morgan Stanley's estimate is correct, it seems Madison Avenue has already gotten the memo. Pew's survey shows a clear shift to digital spending, and the best way to take advantage of this trend is to invest in essential search and distribution companies instead of the publishers.