McDonald's (NYSE:MCD) has found itself at the center of a national battle to raise the minimum wage.

The fast-food giant has been targeted by Fight for $15, a national effort attempting to force companies to raise their lowest pay level to $15 an hour. While the group describes itself on its website as representing "underpaid workers everywhere," it has specifically gone after McDonald's.

"For too long, McDonald's and low-wage employers have made billions of dollars in profit and pushed off costs onto taxpayers, while leaving people like us -- the people who do the real work -- to struggle to survive," the group declares on its website. 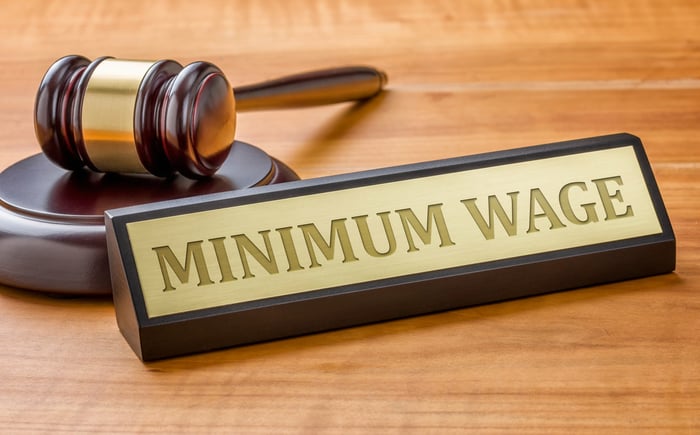 It's an effort that has brought McDonald's plenty of unwanted attention while also creating at least some national debate on the minimum wage. The discussion has pushed other national players, including Wal-Mart and Target, to raise wages across the board. Of course, even after both of those retailers did that, they still pay the average worker well less than $15 an hour.

McDonald's, too, has been forced into making some changes, but it certainly hasn't gone anywhere near a $15-an-hour standard wage.

How much do McDonald's workers make?

The federal minimum wage still sits at $7.25 an hour, right where it has been since 2009. A number of states have legal minimums above that number. According to RaiseTheMinimumWage.com, even the states with the highest minimums, Massachusetts and California, only come in at $10 an hour, while the District of Columbia leads the way at $11.50.

McDonald's has raised wages for its workers at company-owned stores in the U.S. That impacts about 90,000 workers, or roughly 10% of its staff nationwide, according to CNBC. In those locations, the chain set its starting wages at $1 over the locally mandated minimum wage.

"The wages of all employees up to restaurant manager will be adjusted accordingly based on tenure and job performance," the company said in a press release. "By the end of 2016, McDonald's projects that the average hourly wage rate for McDonald's employees at company-owned restaurants will be in excess of $10."

That's a start, but employees at franchised stores are not included in the raises. McDonald's does not share wage information or average pay rates, but Glassdoor.com shows that the average crew member makes $8.26 to $8.47 an hour, while cashiers take in $8.47. Trainers make slightly more an hour, while shift and swing managers generally make a little over $10 an hour.

These are not exact numbers. Glassdoor bases its information on employees of a given company reporting their wages. In this case, the company has thousands of McDonald's workers contributing to the figures.

What does this mean for McDonald's?

The challenge facing the company is that protests are bad for business, as are worker walk-outs, strikes, and other forms of protest. The raises offered at company-owned restaurants keep the chain on a similar low-end pay scale to Wal-Mart and Target, which may not appease the protesters, but it does show some good faith on behalf of the company.

Franchised restaurants, however, are a different story. McDonald's has already had to battle its franchisees over low-margin discount menus and forcing them to pay for expensive McCafe upgrades in order to add a full line of coffee beverages. That puts the company in a position where it might suggest higher wages, but it's unlikely to mandate them (if its franchise agreements even allow it to do that).

This ongoing battle puts McDonald's in a tough position since it's perhaps the most visible company being targeted. Going forward, wages might be pushed higher through choice or legislation. That might be a benefit in the long run since higher wages can cut down on turnover and lead to happier workers, but in the short term, it could lead to lower profits.