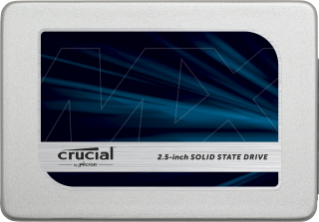 This spring, Micron Technology (NASDAQ:MU), by way of its consumer-facing subsidiary Crucial, released a new solid-state drive known as the Crucial MX300. According to performance tests performed by The Tech Report, it offers virtually identical performance to Crucial's prior-generation MX200 solid-state drive.

Despite the fact that there doesn't appear to be a performance improvement, the MX300 is kind of a big deal for Micron. Here's why.

The market for solid-state drives is turning out to be something of a race to the bottom. Generally speaking, the performance leap that a typical user sees in going from a typical high-performance hard disk drive to even the lowest-end solid-state drive is going to be enormous. The gains beyond that can be noticed, particularly in specialized tests, but the leap isn't anywhere near as dramatic as the initial jump from hard disk to solid-state.

Although there are performance differences between different solid-state drives, it's not clear that many consumers are willing to pay premiums for performance. It's more likely that a typical consumer will want to get as much flash storage for as little as possible -- in other words, consumers often want to minimize price per gigabyte.

In a market in which consumers prefer to pay as little as possible for as much storage as possible, it's critical for a solid-state drive maker to be able to build these devices as cheaply as possible.

The important thing for investors to know: the more bits that can be stored per cell, the cheaper the flash is per gigabyte. The trade-offs, of course, are longevity and performance. But, as I said, consumers seem to want their storage as cheaply as possible.

Another buzzword you might hear these days is "3D NAND." The idea behind 3D NAND is simple: If you stack memory cells on top of each other, you can cram more memory into a given area than in traditional planar (2D) arrangements. In a nutshell, this reduces cost.

Circling back to the Crucial MX300, it's easy to see why this drive is a win for Micron: The company has shifted from planar MLC NAND to 3D TLC NAND, which should allow it to produce these drives much more cheaply.

Micron is charging $199 for a 750-gigabyte MX300 drive, which puts the price per gigabyte at around $0.265. The older-generation MX200, in a 500-gigabyte capacity, sells for $140, or $0.28 per gigabyte. It seems that Micron is giving customers a slightly lower cost per gigabyte, but I suspect that the actual manufacturing cost reductions are greater -- suggesting margin improvements for Micron.