First it was viewed as a long-shot concern. Then investors gained confidence as Brexit seemed likely to pass by as a non-event. Now it's a reality that Wall Street is scrambling to quantify.

While the actual impact of the UK's vote to leave the European Union is impossible to predict (and immaterial to a long-term stock portfolio), investors chose to react to the uncertainty by selling off a broad array of stocks on Friday.

The Dow Jones Industrial Average (DJINDICES:^DJI) tumbled by 3.4% and the S&P 500 (SNPINDEX:^GSPC) shed 3.6%. Both indexes fell back into negative territory on the year: 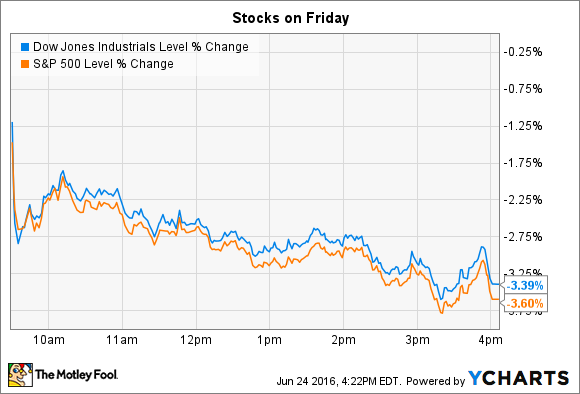 A few individual stocks broke away from those broader trends, in either positive or negative directions. Here's why Goldman Sachs (NYSE:GS) and Finish Line (NASDAQ:FINL) made notable moves on Friday.

Brexit concerns hit banking stocks the hardest and helped Goldman Sachs post the Dow's biggest daily decline. The investment bank's shares were targeted to fall by 5% in pre-market trading but ended up logging a slightly worse performance, shedding 7% by the closing bell.

Goldman Sachs has substantial physical exposure to the UK (over 6,000 employees located in its London office), which may need to be pared back as the Brexit process plays out in the months and years ahead. Meanwhile, its investment banking business would be harmed by a steep drop in global equity prices. Last quarter, for example, that segment posted a 23% decline on what management described as "higher levels of volatility and generally lower global equity prices." That statement describes what investors witnessed on Friday, and so they appear to be bracing for more weakness ahead .

Much of Goldman's business won't change, though. The company will likely continue leading in mergers and acquisition business and in initial stock offerings. Its asset base won't fall much from its record $1.3 trillion even if markets tick down around the world. That's why shareholders shouldn't panic, but need to expect more volatility in their holdings.

Shoe retailer Finish Line was one of the few stocks to buck the downtrend and actually rise on Friday, soaring higher by 22%. Still, that rally only put shareholders about where they stood in early May.

Friday's jump was driven by surprisingly strong quarterly earnings results. Finish Line posted a 1.5% comparable-store sales gain in Q1, which was on pace with the 1.8% growth it logged through all of fiscal 2015. While that's far from outstanding, the uptick beats other mall-based apparel retailers, many of whom have been posting negative comps recently on declining customer traffic trends. Profitability also held steady at 31% of sales. "We delivered first quarter results that were in-line with expectations despite the challenging retail environment," CEO Sam Sato said in a press release .

Sato and his executive team affirmed their 2016 guidance that calls for comps to rise by about 4% as earnings come in at $1.53 per share. Each of those figures would represent a significant improvement over the prior year, which means that Wall Street may have been too pessimistic in selling the stock down to a valuation of 16 times earnings amid fears about general weakness in the retailing industry.