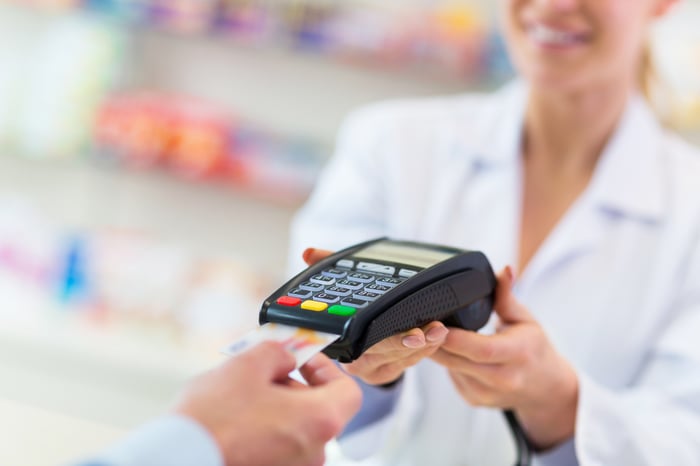 Drugmaker stocks have been hit hard over the past year. The iShares U.S. Pharmaceuticals ETF (NYSEMKT: IHE) is down about 12%, and the iShares Nasdaq Biotechnology ETF (NASDAQ: IBB) has given up a frightening 25% year to date.

Increased spending on cancer medicines is a big reason why these three drugmakers are bucking the trend. Last year, global cancer drug costs reached $107 billion, and that figure is expected to pass the $150 billion mark by 2020. Let me walk you through the roles these companies are playing in this trend, and you'll see why investors are willing to pay such a premium.

Bristol's Opdivo is one of the first drugs to block an immune-system shut-off switch that many cancer cells exploit to evade attack. Since earning FDA approval for treatment of advanced melanoma at the end of 2014, Opdivo has seen its addressable patient population expand to patients with lung cancer, kidney cancer, and, most recently, Hodgkin's lymphoma. I can't recall any cancer therapy gaining regulatory ground as quickly as this drug.

Consider these sales figures: During the three months ended in March, Bristol recorded Opdivo sales of $704 million up 48% over the previous three-month period. To illustrate how significant that is, if sales continues to grow at this rate through the end of the year, then Bristol would record about $5.6 billion in Opdivo revenue alone. Even for a company that put up total revenue of $16.6 billion last year, this therapy is moving Bristol's needle in the right direction.

Before you get too excited, the most optimistic analysts aren't expecting Opdivo sales to continue growing 48% each quarter, even though its pace has surprised the company itself. When Bristol reported first-quarter results at the end of April, it raised earnings expectations for the year by 3% per share over guidance issued just three months earlier.

Few would be surprised if Bristol raised guidance above the current midpoint of $2.35 per share when it reports second-quarter results at the end of July. Next year, the average analyst expects Bristol's earnings to reach $3.22 per share, and that's why investors are willing to pay such a high premium for this Big Pharma stock today.

Merck's cancer therapy, Keytruda, blocks the same shut-off switch as Opdivo and earned its first FDA approval more than three months ahead of its rival, but its expansion hasn't been nearly as rapid. It's currently available for advanced melanoma and a smaller subset of lung cancer patients than Opdivo. Its first-quarter sales of the drug came in at just $249 million.

One of the reasons investors are willing to pay 47 times trailing earnings for this stock is the vast development program under way to expand Keytruda's addressable population. As of mid-May, Merck boasted more than 270 ongoing or planned studies across more than 30 tumor types.

Keytruda's expansion to treatment of advanced head and neck cancer is widely expected to earn the FDA's blessing in the weeks ahead, which could give it a head start in an indication for which Bristol has not announced an Opdivo application. Also encouraging are recently announced trial results that could support expanding its use from certain lung cancer patients who progress following chemotherapy to similar patients who haven't been treated with anything yet.

Celgene: A premium worth paying

Celgene is trading at 33 times trailing earnings, but with annual product sales on pace to more than double from $9.2 billion last year to $21 billion in 2020, I think it's worth every penny.

When the company last reported, first-quarter sales of its leading blood cancer therapy, Revlimid, grew 17% to $1.6 billion. This drug first earned FDA approval over 20 years ago, and Celgene has been using the massive cash flows Revlimid produces to build an impressive product line and a clinical pipeline that Merck and Bristol might envy.

Pomalyst, another blood cancer therapy, earned its first FDA approval in 2013. Its first-quarter sales rose 38% over the same period last year, and sales are expected to pass the $1 billion mark this year.

Celgene's first psoriasis drug, Otezla, is a hit. The psoriasis space is crowded with injected treatments, so Otezla, as a pill, is naturally popular. Approved by the FDA a year later than Pomalyst, Otezla is also expected to add over $1 billion to Celgene's top line this year.

With current products growing, and results from 18 phase 3 trials to look forward to over the next couple of years, Celgene is a biotech bargain.