In recent years, investing in 3D printing stocks has required a strong stomach and high tolerance for pain. Since the start of 2014, 3D Systems (NYSE:DDD), Stratasys (NASDAQ:SSYS) have underperformed the S&P 500 by a shocking margin: 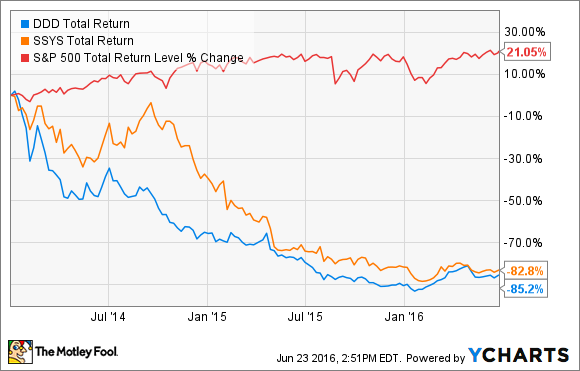 For long-term investors, big price dips can create a buying opportunity, assuming the underlying business fundamentals remain intact. Let's investigate whether either of these 3D printing stocks are now in bargain territory.

Currently valued at $1.6 billion, 3D Systems' market cap hasn't been this low since early 2012. This time around, shares of 3D Systems are trading at nearly 30 times forward earnings. By comparison, the small-cap-focused Russell 2000 index is currently trading at nearly 18 times forward earnings. To put it simply, shares of 3D Systems trade at a 66% premium to the average small cap in the index.

If a stock is trading at a premium to its benchmark, one would think that the business has been performing well and meeting or exceeding investor expectations.

Unfortunately, 3D Systems has been a serial disappointment since its all-time high, plagued with execution issues ranging from product delays to quality control issues and inefficient uses of capital. In hindsight, it's abundantly clear that former CEO Avi Reichental's multiyear strategy of acquiring 10 to 15 companies per year, to expand 3D Systems' market opportunity, distracted management from effectively managing the business's day-to-day needs.

Only recently has 3D Systems begun cleaning house by replacing Reichental with Vyomesh Joshi -- a 32-year HP executive who led the tech giant's $26 billion printing business for 11 years. During this period, Joshi was considered instrumental in doubling the unit's operating profits. Since Joshi's April start date, 3D Systems has brought on a new CFO, COO, and CMO. According to 3D Systems, these shakeups are part of Joshi's three-part plan to remake the company, which involves listening and learning, setting strategy, and reorganizing the company to support any strategy changes.

Like 3D Systems, Stratasys' $1.2 billion market cap hasn't been this low since early 2012. Currently, the stock is trading at over 32 times forward earnings, representing a 77.8% premium above the Russell 2000. By other measures, however, Stratasys trades at a more favorable valuation than 3D Systems:

Stratasys' problems started to snowball in 2015, when customer demand for its professional and industrial 3D printers notably slowed, and its consumer 3D printing unit, MakerBot, experienced strong fallout from the marketplace due to prolonged product reliability issues with its Smart Extruder, a 3D printhead that was introduced in all of its fifth-generation 3D printers. Stratasys believes the slowdown in customer demand was created by the robust growth the industry experienced in previous years, which resulted in customers now having more 3D printing capacity on hand than needed.

As it awaits customer demand to strengthen, Stratasys has been working to reorganize the company, streamline costs, improve execution, and improve profitability. Although the progress has been slow to show up in its quarterly results (likely because customers demand hasn't picked up yet), Stratasys introduced the Smart Extruder+ for its MakerBot printers earlier this year, which addresses the reliability problems associated with its predecessor. More recently, the company has announced that CEO David Reis is retiring at the end of this month and will be replaced by longtime board member Ilan Levin.

The uncertainty of bargains

The challenge with buying bargains is that investors are often betting on companies to stage a successful turnaround, which is inherently uncertain. Technically, Stratasys is cheaper than 3D Systems on most valuation metrics, but that doesn't necessarily make it a bargain. After all, it's not like Stratasys' business fundamentals stayed the same even though the stock dropped -- they haven't. Most notably, customer demand has weakened and the company is undergoing what's likely to be a prolonged restructuring process.

Ultimately, between the uncertainty surrounding restructuring efforts and the demand picture (which is also impacting 3D Systems), I'm hesitant to call either beaten-up stock a bargain.