Investors in Caterpillar Inc. (NYSE:CAT) are probably pleading for the pain to end. Despite a 13% rebound in the stock price during 2016, the company has still shed about a quarter of its value over the past two years as sales have slumped globally. With Caterpillar's top line being driven by the mining, construction, and energy industries, it's obviously been a bleak few quarters for revenue growth. Let's dig into Caterpillar's May retail sales results, how things have looked over the past couple of years, and where the company is going from here.

Let's look at Caterpillar's resource industries segment, which has been devastated globally by weakness in commodity prices and thus less demand for mining equipment. Breaking down its retail statistics per region, Asia-Pacific drove the global loss, with its retail sales declining 48% last month -- which is reported as a three-month rolling period ended as of the month indicated, compared to the prior year. While that was the worst decline in the resource industries, its EAME, Latin America, and North America regions posted declines of at least 20%: down 22%, 23%, and 20%, respectively. 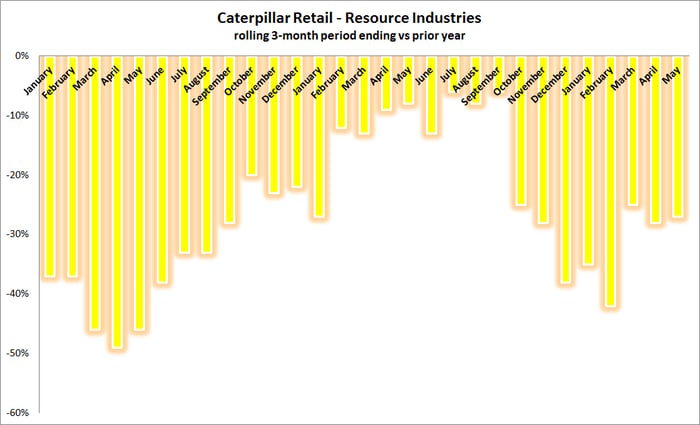 When you add it all up, Caterpillar's global losses have been down at least 25% each month this year, and as you can see in the graph above, it isn't gaining momentum in the right direction. While commodity prices have improved from their lows, it won't be enough to drive increased demand for equipment.

It's important for investors to keep an eye on these retail statistics, because the sales momentum, or lack thereof, will show up during quarterly results. 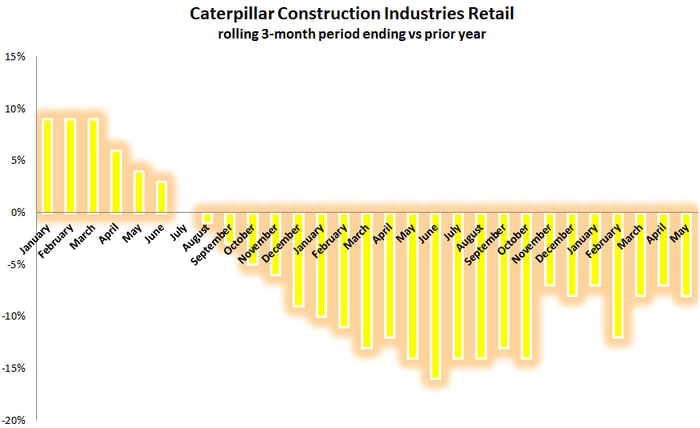 It's easy for investors to forget that a little over a year ago, energy and transportation was the bright spot in an otherwise gloomy sales report. However, since last May, the segment has reversed and plunged lower. 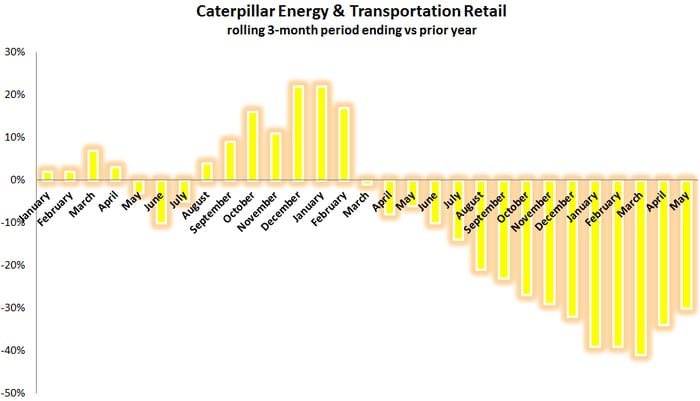 Despite total sales for the segment posting the smallest decline of 2016, it was still a 30% decline compared to last year's May. The culprit shouldn't surprise anybody: Oil and gas posted a sales decline of 41% during May. While oil and gas was the worst of the four segments within energy and transportation, power generation, industrial, and transportation checked in with respective declines of 19%, 15%, and 33%.

Ultimately, these retail sales statistics point to another brutal quarter from Caterpillar since no significant rebound in demand appears to be around the corner. Sales and revenue expectations for the full year have already been slashed by about $1 billion, moving the midpoint of expectations from $42 billion down to $41 billion.

Since investors know that Caterpillar's top and bottom lines will continue to struggle with growth, they should shift their focus to how well the company continues to cut costs -- Caterpillar noted that its period costs and variable manufacturing costs were reduced by $500 million during the first quarter, compared to the prior year.

As long as the company can continue to generate cash, maintain its dividend, reduce costs, and prepare for an eventual rebound in its business segments, the worst might be over for investors, although a significant rebound in sales and profits is likely years away.