How was this list of top-paying dividend stocks created?

The stocks selected for this list of the top-10 dividend-paying stocks are not the highest-yielding dividend stocks on the market, but they're among the most reliable with respectable dividend yields. With two exceptions, all of the stocks on the list pay a dividend with a yield at least 50% greater than the average yield of the S&P 500.

Proctor & Gamble's (NYSE:PG) dividend yield is technically 47% higher than the S&P's average at the time of this writing, but the company has raised its dividend every year for the past 60 years. So, at least to me, 47% is close enough. We'll touch on the other exception in just a moment.

Each stock -- again with the same one exception -- is a large-cap company with a strong, market-leading presence in its industry. They are financially sound, and many are household names. They are the bluest of the blue chips.

In other words, these are stocks that you can buy, enjoy the dividend checks every quarter, and not lose any sleep about the future.

It was in that same spirit that American States Water (NYSE:AWR), the one exception to the above, was included on this list. The company's dividend is equal to the current yield of the S&P 500, but there's much more to this story than just the yield.

The company is ridiculously stable and consistent. It's increased its annual dividend every single year for the past 61 years.

High-quality stocks that pay handsome dividends are great choices for long-term investors. Like pouring gas onto a fire, the dividends help the stock price soar above alternative investments.

Consider the pharmaceutical giant AbbVie (NYSE:ABBV). Since its spinoff from Abbott Laboratories in January of 2013, the company's stock price alone, excluding dividends, has outperformed the S&P 500 by a little more than 30%. If you include AbbVie's reinvested dividends using the total-return price metric, the performance is even more impressive, beating the S&P 500 with reinvested dividends by nearly 45%. 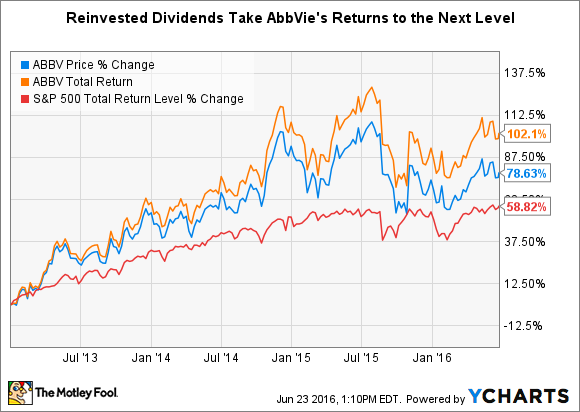 This characteristic is similar to most quality companies with strong dividend yields. The additional returns provided by the dividend push the stock to levels that other companies struggle to match.

It's worth nothing that AbbVie is probably the riskiest of the stocks on this list. AbbVie generates the majority of its revenue from a single drug, Humira, which will lose patent protection in the U.S. at the end of 2016, and in Europe at the end of 2018.

The stock has taken a hit this year as the market prepares for new competition to erode revenue related to Humira. With the patent cliff looming, AbbVie has developed a deep pipeline of new drugs, with several already approved by the FDA, and numerous more at, or past, stage 3 trials. However, it's still too early to tell exactly how this dynamic will play out, so proceed with caution.

Three of these are favorite Warren Buffet stocks

When a stock is owned by arguably the greatest investor of all time, it's just one more reason to give the company and its dividend a closer look. In this case, there are three such stocks on this list, each owned by the Oracle of Omaha himself, Warren Buffett.

General Motors (NYSE:GM) is both the highest-yielding stock on this list, and has the most money invested by Buffett. Buffet owns about 50 million shares of General Motors stock. Verizon Communications' (NYSE:VZ) 4.2% dividend yield is impressive in its own right -- and enough so for Buffett to own stock worth just more than $800 million.

The French drugmaker Sanofi (NASDAQ:SNY) is the final Warren Buffett stock on this list. Sanofi is driven by popular drugs like Plavix and Allegra, and it has a pipeline sufficient to convince Buffett to invest $150 million.