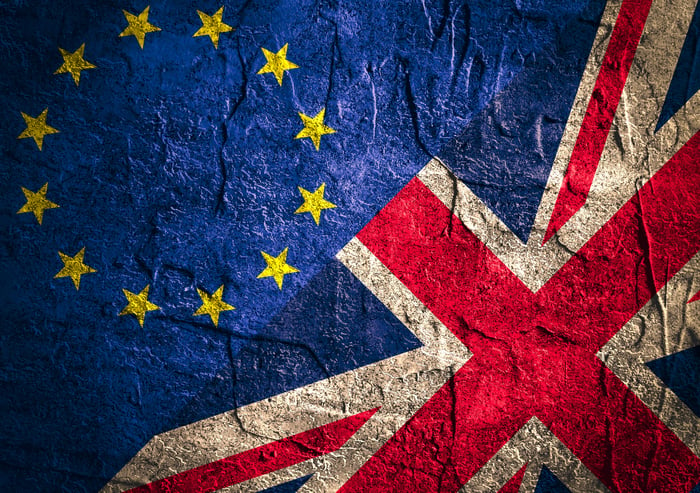 Both most investors and the media have been pretty pessimistic when it comes to the U.K.'s decision to bail on the European Union, and for good reason. It's also simple for investors in major automakers to understand how increased regulations and a potentially hindered economy could negatively impact vehicle sales, but how will the Brexit impact other players within the automotive industry? Let's look at some estimates, as well as the impact the Brexit could have on dealership groups and parts suppliers.

Starting from the top

To understand how this situation will impact certain investments, let's look at the data starting from the top. LMC Automotive estimates that sales in the U.K., which is Europe's second-largest market for new-vehicle sales, could decline by 120,000 units this year alone. That's nearly a 10% decline, considering the U.K. recorded 1.6 million vehicle sales last year. Furthermore, LMC Automotive estimates the sales decline could total 400,000 units over the next two years.

IHS Automotive believes things could be even worse for the U.K. auto market. The auto research company estimates the U.K.'s decision to leave the EU could cost about 2.8 million light-vehicle sales through 2018.

That potential decline is brutal news for auto retailers.

Penske Automotive Group (NYSE:PAG) and Group 1 Automotive (NYSE:GPI) are two of the largest publicly traded U.S. automotive retailers which have U.K. operations. They initially shed roughly 13% of their value in the days after the Brexit vote was tallied, and are trading just above their respective 52-week lows.

While opinions will vary on whether that decline is appropriate, there's no denying these two retailers generate a chunk of business in the U.K. market. Consider that Group 1's 29 stores in England generated about 18% of its first-quarter vehicle sales, and that it expected its U.K. operations to generate about $1.8 billion in annual revenue going forward. The story was similar for Penske and its 94 U.K. dealerships, which accounted for about 35% of its first-quarter revenue.

However, it isn't just retailers that are going to feel the impact. Consider Delphi Automotive PLC (NYSE:DLPH), which also watched its share price drop 12% on Friday. The former parts-supplier unit of General Motors is based in Gillingham, Kent, U.K., although a significant portion of its operations are now run out of Troy, Michigan, thanks to its proximity to the Detroit auto manufacturers. While being headquartered in the U.K. will present some challenges, the big question was how much of the impact would filter down from Delphi's largest customers: General Motors, Volkswagen, and Ford.

BorgWarner Inc. (NYSE:BWA) had a similar decline in stock price Friday, largely for the same reason: its two largest customers are Volkswagen and Ford, which combined to generate about 30% of the company's global sales last year and are expected to be two of the hardest-hit automakers amid the Brexit fallout.

While the initial reaction for automakers, dealership groups, and parts suppliers with a presence in the U.K. has been negative, investors should absolutely refrain from making any knee-jerk investing decisions. Sure, the vote to leave has been made, but the details of how the European Union and the U.K. proceed with trade regulations and policies are far from complete. It's in the best interest of all parties to make sure business is impacted as little as possible.

Delphi is a great example of why investors shouldn't panic as a result of the Brexit vote; the company's growth story remains strong as its products are focused on autonomous driving, increasing safety regulations, and the rising demand for greener vehicles. Ultimately, investors should keep in mind that this doesn't change these companies' long-term investing theses.