Until recently, electric-car maker Tesla Motors (NASDAQ:TSLA) wasn't making it easy for consumers to test drive its September-launched Model X SUV. But as production of the vehicle continues to ramp up, so are Tesla's efforts to highlight the falcon-winged vehicle.

While Tesla began the first deliveries of its Model X last September, the vehicle has mostly remained out of the limelight until recently. Combining the approximately 30,000 deposit-backed reservations Tesla had garnered for the Model X going into 2016, along with a slower-than-expected production ramp, Tesla simply hasn't had much incentive to market the vehicle vigorously. Indeed, earlier this year during an earnings call Tesla management even went as far as to emphasize it was doing virtually whatever it could to suppress demand for the SUV.

But as Tesla's Model S production increases, so too is its marketing for the vehicle.

Here's the progression of some of Tesla's growing efforts to show off the Model X:

Notably, it appears Tesla's marketing push for Model X is generating quite a bit of interest; Model X test-drives appear to be pushed out nearly a month at many of Tesla's stores.

Tesla's more aggressive test-drive push for the Model X, along with some front-page promotion for the vehicle, comes just after the company announced its second-quarter deliveries, which highlighted a significant jump in Model X deliveries. 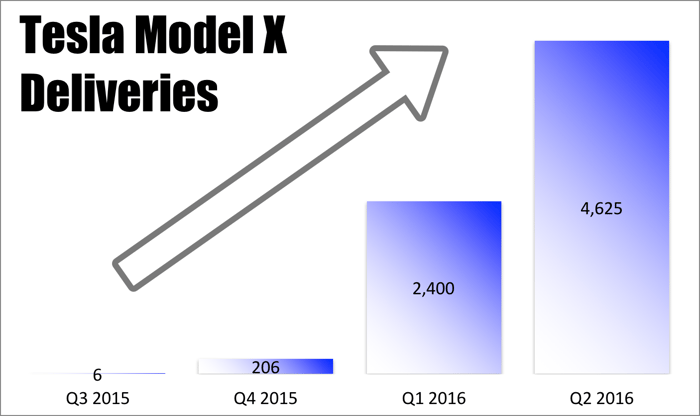 In Q2, Tesla delivered 4,625 Model X units, up about 93% compared with Q1. The significant jump in Model X production means it's starting to make sense for Tesla to show off its Model X more prominently.

Tesla has successfully relied on broad availability of test-drives as a demand generator with great success in the past. For instance, its Double Black All-Wheel Drive tour launched last year to promote its late 2014-launched dual motor versions of its Model S was played a role in Tesla's soaring Model S sales during the year, which increased from about 31,700 in 2014 to over 50,000 in 2015. Further, the company has specifically acknowledged that availability of test-drives have been a key demand driver for the company.

Tesla is particularly reliant on test drives because it doesn't pay for any advertising. Further, since the fully electric experience is so much different from an internal combustion engine experience, Tesla depends on test-drives as a way to show off its vehicles' advantages.

As Model X production continues to ramp up, Tesla's marketing efforts for the Model X will probably increase, too. Perhaps the next step is a touring test-drive event, akin to the Double Black All-Wheel Drive tour for Model S, for Model X.

For now, the Model X remains production-constrained. But as Tesla makes a dent in its backlog of deposit-backed reservations, it will be interesting to see how high demand generation efforts for the Model X can take sales over the longer term.