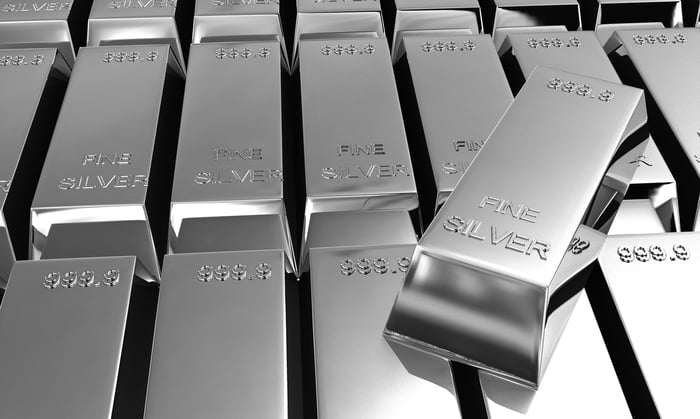 What: Shares of Great Panther Silver (GPL -10.00%), a silver mining and exploration company with properties located in Mexico, plunged as much as 19% during Thursday's trading session after the company announced an increase to a previously announced financing deal.

However, just five hours after the initial bought deal financing was announced, Great Panther issued a second press release detailed that the offering had been increased to 16.25 million shares at $1.60, worth $26 million. Each common share would still come with one-half of common share purchase warrant, which is executable at $2.25 per share for a period of 18 months following the offering.

In layman's terms, Great Panther Silver arranged a way to get capital to further its mine development, but it'll wind up diluting existing shareholders in the process.

On the bright side, Great Panther Silver has other catalysts working in its favor. For example, silver spot prices have been steadily rising, and the lustrous metal doesn't look as if it'll pare a big chunk of its gains anytime soon. Demand for silver has been increasing from an investment perspective, as well as from the solar industry. Plus, a low-yield environment in developed countries around the globe is coercing investors to dive into precious metals as a potentially more attractive store of value than bonds.

Aside from higher silver prices, we've also observed Great Panther making strides at cutting its production costs. During the first quarter, Great Panther managed to lower its all-in sustaining costs by 36% to $9.25 per payable ounce, all while increasing its silver equivalent production by 2%. Although it reported a net loss of $4.5 million in Q1, adverse effects from currency translation were mostly to blame. The company's underlying business is improving, even if shareholders took one on the chin today.

While it's probably wise to temper your near-term expectations, and smart to expect the volatility surrounding Great Panther to continue, it's a silver miner that investors savvy in precious metals might want to consider looking into.