What: Shares of Fairmount Santrol Holdings (NYSE: FMSA) are getting hammered in early trading on Friday, slumping 20% at 11 a.m. EDT. Fueling this sell-off was the company's announcement of weak preliminary second-quarter results. That report is weighing on the entire frack sand sector, pushing down the equity prices of Hi-Crush Partners (HCRS.Q), Emerge Energy Services (NYSE: EMES), and U.S. Silica (SLCA 2.57%). 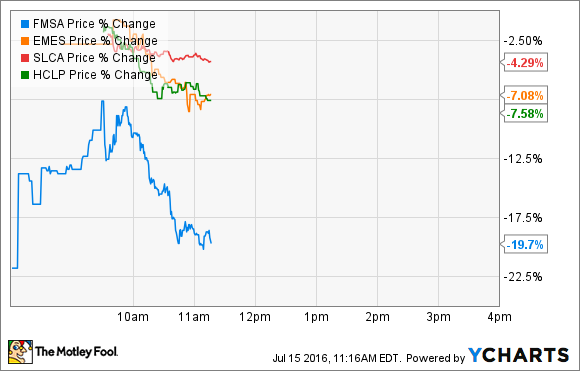 So what: Fairmount Santrol pre-announced that it expects its second-quarter revenue to be between $113 million and $115 million to go along with a loss of $0.56 to $0.58 per share. These numbers were well below the consensus forecast, with analysts projecting revenue of $136.7 million and a loss of $0.12 per share. The culprit was weaker volumes, which slumped to a range of 1.9 million to 2 million tons and were well below the 2.1 million tons the company sold last quarter due to pressure on volumes and pricing.

These data points imply that the proppant market, in general, was weak, which does not bode well for fellow proppant producers Hi-Crush Partners, Emerge Energy Services, and U.S. Silica. It suggests that all three rivals will experience similar shortfalls between their results and analysts' expectations.

Now what: While oil and gas prices improved during the quarter, this did not translate into improved performance for Fairmount Santrol. What we don't yet know is if this was a company-specific issue or a sectorwide phenomenon. The market isn't taking any chances, selling off the whole group until more details are released.

Matt DiLallo has no position in any stocks mentioned. The Motley Fool recommends U.S. Silica Holdings. We Fools may not all hold the same opinions, but we all believe that considering a diverse range of insights makes us better investors. The Motley Fool has a disclosure policy.