What: Shares of fast-food giant Yum! Brands (NYSE:YUM) are up 20% so far in 2016, according to data from S&P Global Market Intelligence. The company's plan to spin off its China business into a separate publicly traded company and strong quarterly results have pushed the stock steadily higher. 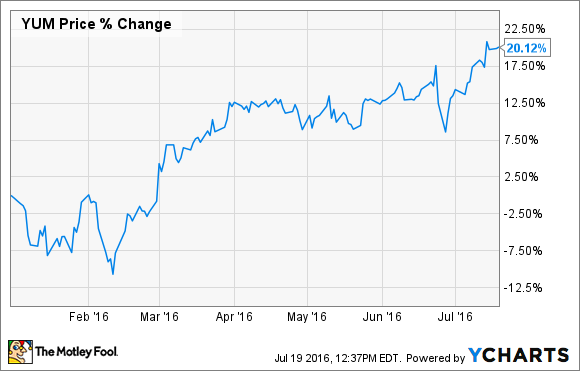 So what: Last fall, the parent of KFC, Pizza Hut, and Taco Bell announced plans to spin off its China business after a series of food safety scandals had dampened results in the company's biggest market. Oddly, a rebound in the China division has been a major reason for the stock's growth this year, recovering after a double-digit drop in comparable sales in 2015. There are more than 5,000 KFC restaurants in China and nearly 1,600 Pizza Hut restaurants, with plans to open a Taco Bell in the country this year.

More recently, Yum! stock popped 3% on its second-quarter earnings report as the company lifted its full-year guidance, saying it now expects operating profits to grow 14%, up from previous guidance of 12%.

Now what: Though the company is facing challenges at home, with comparable sales flat at Pizza Hut and down 1% at Taco Bell last quarter, anticipation for the China separation should continue to buoy the stock, as the better-than-expected results add value to the new entity. The spinoff will also allow Yum! to become a pure-play franchiser as its China stores are company-owned, but will be franchised to the separated entity.

Refranchising has been a popular trend in fast food recently as it allows a company to cut back on capital expenditures and cushions it from economic volatility. The spinoff should make the new Yum! more stable and give an option to investors looking for exposure to China. The separation is expected to completed in October. Expect more details from management as that date approaches.