What can German Immigrant Levi Strauss teach you about investing? 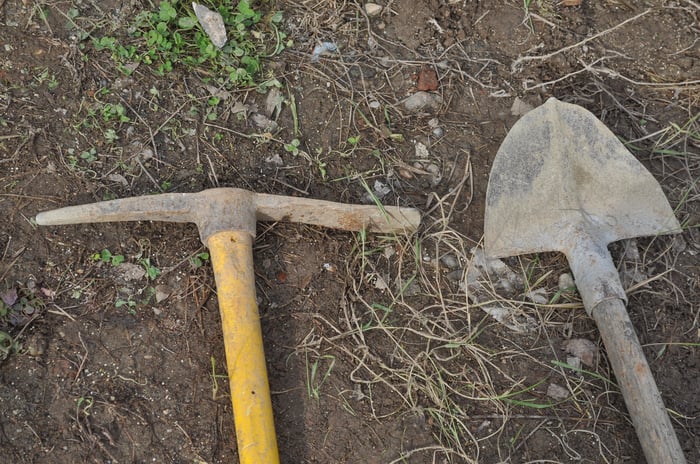 In American history, perhaps there's no better example of the risks and rewards of the entrepreneurial spirit than California's Gold Rush. From 1848 to 1856, hundreds of thousands of American settlers with riches on their minds, and the belief in Manifest Destiny in their hearts, made the arduous trek to Sutter's Mill California. Of those who completed the journey, very few -- if any -- found long-term wealth mining gold. Many ended worse off than before their arrival.

Still, fortunes were made during the gold rush. German immigrant Levi Strauss opened a dry-goods store to peddle items like clothing and bedding to these fortune seekers, in addition to tools, like picks and shovels, which made the mining process easier. Later, Levi Strauss invented his signature blue jean -- and the rest is history.

Within a few years, there were nearly 300,000 "forty-niners" who relocated to the area, all with the hopes of striking it rich mining gold; yet only one individual's name adorns the stadium for the San Francisco 49ers, the team named for these miners. Levi Strauss, the inspiration for the team's Levi Stadium, made none of his wealth directly due to gold, and all of it indirectly.

Strauss' path to wealth was so successful that it has been copied by subsequent businesses. Instead of following the crowd and becoming another unsuccessful front-line participant, there's as much -- or more -- wealth to be made from providing others the tools they need to be productive and successful. True to its Gold Rush origins, these businesses are referred to as pick-and-shovel companies.

How does this matter to current investors? Well, there's a great deal of current investments that follow the pick-and-shovel strategy. A company that solves a problem, increases productivity, or provides the required equipment a company needs in its production process is a pick-and-shovel investment. It's a powerful business model, and tends to be overlooked, and misunderstood by investors.

The biggest pick-and-shovel play has become one of the largest companies in the United States in its own right. Microsoft (MSFT -2.03%) has been one of the most-successful companies since its IPO in 1986. If you would have purchased one share of stock at the IPO price of $21 per share 30 years ago, and held through the company's nine stock splits, it would be worth approximately $16,100 today.

Cloud computing is the next growth driver

It may be difficult to think of Microsoft as a pick-and-shovel play, but the key to Microsoft's success has been the tremendous boost in productivity, efficiency, and cost savings the company has afforded fellow businesses. Through Microsoft's popular Office Suite, positions were automated, saving companies money, and costly expenses like messenger services and postage were replaced by low-cost email.

Microsoft's newest service, cloud computing, has taken off with businesses in a major way. Microsoft reported commercial cloud annualized-revenue growth of more than 50%, up to $12.1 billion, which is nearly 13% of Microsoft's full-year revenue.

The cloud, which is simply another term for offsite storage and application delivery, continues to be a high-growth business with companies like Microsoft, Amazon, and International Business Machines leading the way. Microsoft has a natural fit with businesses utilizing its Office suite, and should continue to be a leader in the industry.

It would be unfair to say Microsoft is a perfect investment. The company's catchall "more personal computing" division saw a year-on-year decrease of 4% in the recently reported fourth quarter due to poor Windows Phone sales, and decreases in gaming revenue due to Xbox console sales. However, both revenue decreases were widely expected by Wall Street analysts.

If commercial cloud revenue continues to grow at these torrid rates, Microsoft's one-year run of 20% could continue, even with weakness in the company's personal-computing segment.