What: It was a relatively quiet week in the energy sector. Sure, oil slumped about 4%, but oil price volatility is the norm these days. That said, the lack of news did not keep energy stocks from bouncing around. According to data from S&P Global Market Intelligence, the biggest movers this week were Arc Logistics Partners (NYSE: ARCX), Capital Products Partners (CPLP 0.07%), Chesapeake Energy Corp. (CHKA.Q), Navios Maritime Midstream Partners (NYSE: NAP), and Overseas Shipholding Group (NYSE: OSG). 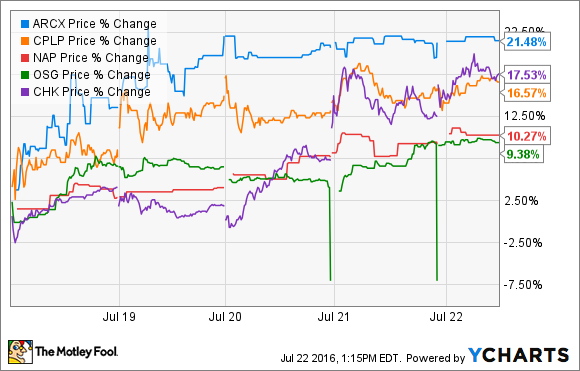 So what: Tanker stocks Capital Products Partners, Navios Maritime Midstream, and Overseas Shipholding were on the move this week due to company-specific news announcements. Overseas Shipholding started things off on Monday when it announced that it would separate its international business from its domestic business and create two stand-alone public companies to drive "long-term growth and profitability." Navios Maritime, meanwhile, declared its quarterly distribution on Thursday, which was in line with its previous payment. Capital Product Partners, likewise, announced an in-line quarterly distribution on Thursday, though that payout was 68.6% lower than what the company had been paying before cutting the distribution last quarter. These announcements drove nearly the entire tanker stock sector higher, as investors viewed the stable payouts and value creation plan as signs that the outlook for the industry is improving.

Meanwhile, an analyst upgrade was the fuel driving Chesapeake Energy's surge this week. On Thursday, Tudor, Pickering, Holt & Co. upgraded the stock from a hold to a buy, causing shares to take off. That bullish report ignited heavy trading, especially in Chesapeake Energy's options, with volume doubling as traders bought call options to capture a quick profit from the rally. In particular, traders bought options that expire shortly after the company reports its second-quarter results in early August, implying that they expect the company to deliver an upside surprise.

Finally, no known catalysts fueled Arc Logistics Partners' sharp rally this week. Instead, investors apparently grew less concerned about the company's ability to maintain its payout, now that the oil market seems to be showing some signs of improvement.

Now what: Overseas Shipholding was the only company to announce potentially thesis-altering news. Its decision to split in two has the potential to create value for its investors if everything goes according to plan. Otherwise, the rest of this week's moves can just be chalked up to market noise.