A combination of weaker-than-expected energy-related revenue and delays in some toll and traffic projects caused Roper Technologies (ROP -1.59%) to deliver earnings at the bottom end of expectations. As a result, management reduced full-year guidance, but it also served notice that outside of the problem issues, Roper's underlying performance was much better. Let's look at the details of the quarter. 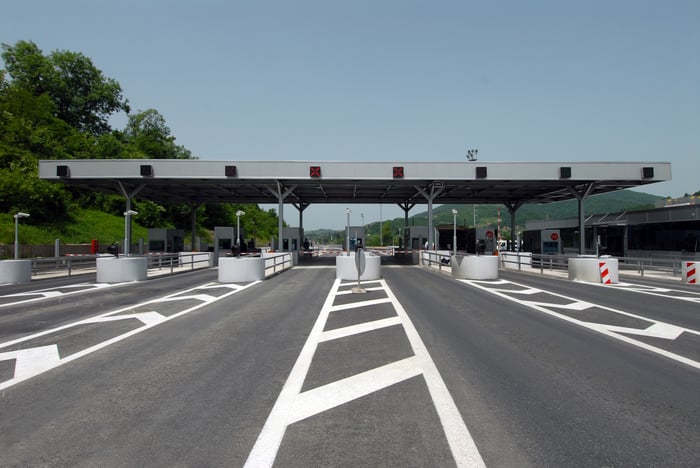 As you can see, organic revenue was below guidance and EPS was at the bottom of the guidance range, even as orders improved and free-cash-flow generation remained impressive.

Why full-year guidance was reduced

It was due to a combination of factors which management outlined on the earnings call. For reference, Roper's 2015 full-year revenue was around $3.6 billion.

It all adds up to around $60 million.

Roper isn't the only company to report weaker-than-expected energy-based spending -- it's been a recurring theme in the current earnings season -- so no real surprises there. However, the toll road project push-out is disappointing.

In discussing the issue, management claimed the toll road project is "still going to continue to happen," so investors will be hoping that an eventual completion of the Saudi Arabia project could boost revenues in future.

Moreover, on the earnings call, CEO Brian Jellison argued that, excluding oil and gas, "The underlying core nature of the business is continuing to grow at double digits"; part of the reason why he expects second-half revenue to rise 7% to 9%.

His argument is based on stripping out oil and gas revenue and the impact of discontinued businesses. On this basis, second-quarter revenue rose 11% from $843 million to $934 million -- with acquisitions contributing 80% of the growth -- and Jellison further commented, "The good news is that for the balance of the year, we think the second half will be similar, where we'll be up more than 10% excluding oil and gas, but we'll have a better organic growth."

He also brought up the prospect of more acquisitions -- an integral part of Roper's business model -- creating some upside potential: "We said at the beginning of the year, we'd expect to deploy $1 billion, but $275 million awarded thus far. And it's not going to be difficult to find a way to deploying that level of activity."

All told, the reduction in full-year guidance is obviously a negative, but Roper's underlying business looks good. According to management's projections, the second half will see a uptick in revenue growth for the company, and acquisitions could yet lead to some upside to earnings.

Lee Samaha has no position in any stocks mentioned. The Motley Fool recommends Roper Technologies. We Fools may not all hold the same opinions, but we all believe that considering a diverse range of insights makes us better investors. The Motley Fool has a disclosure policy.

Roper Technologies Stock -- the Berkshire Hathaway of the Industrial Sector