Investors forgive falling iPhone sales, as promising signs of a healthy underlying business surface and as a path back to growth appears within reach.

Apple's (AAPL -2.12%) revenue and EPS declined by double-digit percentage points in Q3, year over year. Despite the decline, shares traded 6.6% higher during the first trading day after the report. Apple's wildly conservative valuation came to the rescue.

Here's a closer look at the company's third-quarter results -- and why investors are pleased.

Going into Q3, it was already clear Apple would post another quarter of year-over-year declines in revenue and EPS. Not only did management guide for a comparatively worse third quarter than Apple's results in the year-ago period, but analysts were also expecting a decline.

Investors shouldn't mistake Apple's year-over-year decline as a struggling business. The company's net income for the quarter amounted to a whopping $7.8 billion. While this is lower than its record $10.7 billion third-quarter net income last year, it's $100 million more than its $7.7 billion of net income in the same quarter two years ago.

iPhone SE was a hit

One major takeaway from the quarter was the surprising success of Apple's new, lower-cost iPhone, or the iPhone SE. With a starting price of $399 -- or about $250 less than the starting price of Apple's flagship iPhone -- it was unclear whether the smaller iPhone would attract many customers.

But the iPhone SE was clearly a hit. Launched just before the quarter started, it saw demand outstripping supply throughout the entire quarter, even as the company added additional capacity, Apple CEO Tim Cook explained during the company's third-quarter earnings call.

Cook continued (via a Reuters transcript):

At its launch, we said that the addition of the iPhone SE to the iPhone lineup placed us in a better position to meet the needs of customers who love a 4-inch phone and to attract even more customers into our ecosystem. In both cases, that strategy is working. Our initial sales data tells us that the iPhone SE is popular in both developed and emerging markets and the percentage of iPhone SE sales going to customers who are new to iPhone is greater than we've seen in the first weeks of availability for other iPhones launched in the last several years.

Notably, lower average selling prices for iPhones, driven by robust iPhone SE sales, had a negative impact on the company's gross profit margin during the quarter, management said. But management emphasized that the impact was only slight. Gross profit margin was 38% -- down from 39.7% in the year-ago quarter. This is a relatively modest decrease, considering that iPhones, which represent Apple's most profitable product segment, accounted for 63.2% of revenue in the year-ago quarter and 56.8% of revenue in the third quarter of 2016. Further, Apple's gross margin for the quarter was at the top of its guidance range for 37.5% to 38%. Clearly, therefore, any negative impact the iPhone SE had on margins isn't worth fretting over.

The iPhone SE is proving Apple may be able to significantly boost revenue by maintaining this new strategy of introducing less expensive iPhones -- all while having only a minor negative impact on the company's gross profit margin.

Cook is optimistic about iPhone's potential

Despite the iPhone SE's better-than-expected success in Q3, analysts were still ready to ask Cook about his thoughts on the iPhone's potential. After all, investors have a right to be somewhat concerned; iPhone unit sales have been declining on a year-over-year basis for two quarters in a row, falling 15% in Q3. 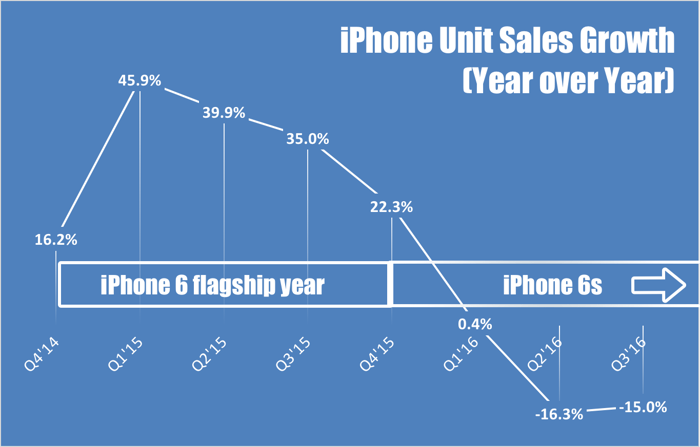 I see an installed base that has gotten incredibly large. I see a switcher rate that is the highest ever. I see the smartphone itself, lead by iPhone, becoming even more instrumental and important to peoples lives. It's becoming essential, and all of the things that are coming both in the fall. The things that we've announced that you can see with iOS 10, hopefully you're running by now, with the beta and other things make it even more instrumental ...

Apple again emphasized the growing importance of its services segment, which was its second-largest segment for a second quarter in a row and increased to represent 14.1% of sales, up significantly from 10.1% of sales in the year-ago quarter. The segment's revenue increased by 19%, year over year, in Q3, easily outpacing Apple's 7% revenue increase in its iPad segment -- Apple's only other product segment that grew during the quarter.

And Apple was careful to highlight its fiscal 2016-introduced non-GAAP metric, which measures the purchase value of services tied to its growing installed base of devices. Apple's installed base-related purchases increased 29% year over year, up from 27% year-over-year growth in Q2 and marking the fourth acceleration in growth since the metric was introduced three quarters ago.

Despite some promising signs for Apple's business, investors shouldn't expect the company to return to growth just yet. Management forecast fourth-quarter revenue to be between $45.5 billion and $47.5 billion -- down about 9.7% from Apple's $51.5 billion of revenue in the fourth-quarter of 2015.

However, Apple could return to growth during its first fiscal quarter of 2017, which begins Oct. 1. Apple's fourth quarter of fiscal 2016, or the current quarter, is Apple's final quarter of year-over-year comparisons of the iPhone 6s cycle to the blockbuster iPhone 6 cycle, so Apple was expected to guide for a decline. But investors may begin looking for growth again when Apple launches its fall lineup of flagship iPhones.

Overall, Apple's third-quarter results marked a company continuing to have difficulty living up to a monster upgrade cycle for the iPhone 6 and 6 Plus last year. But the quarter also put a spotlight on evidence suggesting the tech giant can still attract and keep new customers. With iPhone SE proving to be a good bet, and Apple's services segment looking promising, investors can have more confidence Apple will soon reverse its declining earnings.

Meanwhile, investors can take comfort in the stock's conservative valuation. The stock simply doesn't require big growth to justify its 11.5 price-to-earnings ratio. Indeed, thanks to Apple's cheap valuation, if Apple's iPhone segment does return to growth in within the next twelve months, the stock may turn out to be a steal at this level -- even after Wednesday's 6.6% rise.