Please ensure Javascript is enabled for purposes of website accessibility
Log In Help Join The Motley Fool
Free Article Join Over 1 Million Premium Members And Get More In-Depth Stock Guidance and Research
By Cory Renauer – Jul 28, 2016 at 10:34AM

Find out if the healthcare conglomerate is more attractive than the pharmaceutical pure play. 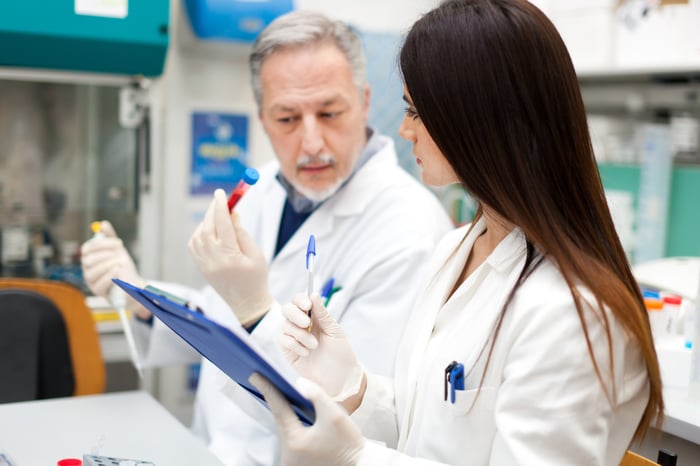 Every day, another 10,000 Americans celebrate their 65th birthday, a phenomenon expected to continue for about 15 more years. When the last baby boomer reaches this age in 2030, about one in five Americans -- around 72 million people -- will be 65 or over.

The average cost of providing care to adults over 65 is three to five times higher than those under 65, and about 95% of those costs arise from treating chronic conditions. Healthcare conglomerate Johnson & Johnson (JNJ 0.13%) and pharma heavyweight Pfizer (PFE 0.74%) are both positioned to ride this demographic trend.

Research-based pharmaceutical segments are churning out new drugs to treat chronic conditions that affect older patients. Since their recent stock performance has diverged, investors are wondering which one represents a better buy right now. Let's compare Johnson & Johnson to Pfizer on a handful of metrics to see which is more attractive today.

Over the past year, both companies have shrugged off pessimism that has led the iShares US Pharmaceuticals ETF about 15% lower. Pfizer's stock is up about 7% for the year, and J&J shares have marched 25% higher than where they stood a year ago.

Pfizer's relatively subdued stock performance has kept its dividend at a tempting forward yield of about 3.3% at recent prices. That's well above the 2.6% yield J&J shares are offering at present, but a peek beneath the surface renders Pfizer's dividend far less attractive.

The pharma giant's annualized distribution of $1.20 is nearly equal to earnings of $1.22 per share reported during the past 12 months. While I don't expect Pfizer to slash its dividend -- as it did in 2009, from $1.28 to $0.80 -- it may struggle to increase its payout along with many of its big pharma peers.

Buoyed by consumer goods and medical device segments, J&J's patent cliff suffering has been relatively minor. The conglomerate is a picture of sustainable growth -- at present, it's the only company with a completely spotless AAA credit rating -- with 32 straight years of adjusted earnings growth and 54 consecutive annual dividend increases. Those increases have kept the dividend growing at an annual rate of 8.8% over the past 10 years, compared to Pfizer's 4% dividend growth rate over the same period. The current annualized payment equals about 54% of trailing earnings, leaving plenty of runway for J&J to continue making steady raises.

Past performance doesn't predict future results, but if we assume both companies continue raising their payouts at present 10-year dividend growth rates, J&J stock purchased today would generate a greater yield than Pfizer stock by 2022.

The CDC estimates U.S. women at age 50 today have an 8.75% chance of developing breast cancer by their 80th birthday. For many of these patients, Pfizer's Ibrance is quickly becoming an important treatment option.

The drug's ability to nearly double progression-free survival in advanced patients when added to a standard chemotherapy is resonating with oncologists, and its launch has been spectacular. Approved by the FDA last February, Ibrance finished the first quarter on pace to pass $1.7 billion in annual sales. Look for signs of acceleration when Pfizer reports second-quarter earnings early next month.

Johnson & Johnson has two rapidly growing treatments of chronic diseases that affect older Americans disproportionately. Earlier this year, Imbruvica, partnered with AbbVie, became the first chemotherapy-free treatment option for untreated patients diagnosed with the most common form of leukemia. Compared to the same period last year, sales of Imbruvica pills in the first half more than doubled, to $556 million, and could eventually contribute $5 billion to J&J's annual revenue.

Also driving growth for J&J is its next-generation diabetes pill, Invokana, which allows excess blood sugar to exit the body through the urinary tract rather than relying on insulin to signal glucose absorption. One common feature of advanced type 2 diabetes -- the type that affects about 95% of adult diabetics -- is an inability to respond to insulin. This helps explain how Invokana is quickly becoming an important option for an estimated 29 million diabetics in the U.S. alone. In the first half of the year, Invokana sales rose 18% compared to the same period last year, to $708 million, and they could top out at more than $4 billion annually.

Pfizer's recent addition of Hospira's generic drug offerings should help smooth out future losses to generic competition for key products such as Lyrica. The neuropathic pain reliever lost European exclusivity in 2014, and the U.S. patent expires in 2018. Contributions from off-patent areas have dwindled, but first-quarter U.S. Lyrica sales comprised 7.7% of Pfizer's total revenue for the period.

Johnson & Johnson is also exposed to competition for aging drugs in its product lineup, but with highly profitable consumer goods and medical device segments contributing more than half of total revenue, the potential losses are far less threatening.

Pfizer's lower valuation and higher dividend yield are tantalizing, but I think J&J shares are more likely to provide market-beating returns over the long haul. For now, that makes the conglomerate more attractive to risk-averse investors seeking steady dividend growth.

Cory Renauer owns shares of Johnson and Johnson. You can follow Cory on Twitter @TMFang4apples or connect with him on LinkedIn for more healthcare industry insight. The Motley Fool owns shares of and recommends Johnson and Johnson. We Fools may not all hold the same opinions, but we all believe that considering a diverse range of insights makes us better investors. The Motley Fool has a disclosure policy.