Investors are likely waiting with bated breath to see if the BG Group deal leads to Royal Dutch Shell (RDS.A) (RDS.B) to start gushing profits. This quarter, however, showed that they have a long wait ahead of them. While some of Shell's peers have been showing signs of promise in their recent earnings reports, the same couldn't be said for Shell. Here's a quick look at Shell's results for the second quarter and why we're still waiting for Shell to turn things around.

For two quarters now, we have been able to look at Shell's results with BG Group in the mix. The last quarters consisted of pro forma results, but the company has redone its accounting for prior quarters to adjust for the changes.

One thing to remember about these figures is that the company issued about 1.6 billion shares as part of the BG deal. That's why the per-share math looks a little funny from quarter to quarter here.

Shell's results did improve a bit compared to this time last year, but part of that has to do with a cost of supply adjustment for its downstream segment and the writedown of what management calls identified items. If we strip these out, the company actually saw a decline in results. Its North American upstream production unit continues to struggle as it posted yet another loss of more than $1 billion. This quarter, Shell's European production segment also had a rough go of it as it posted a loss of $820 million. Despite some marginal improvements in its integrated gas segment and relatively strong earnings from downstream assets, its upstream production continues to post large losses. 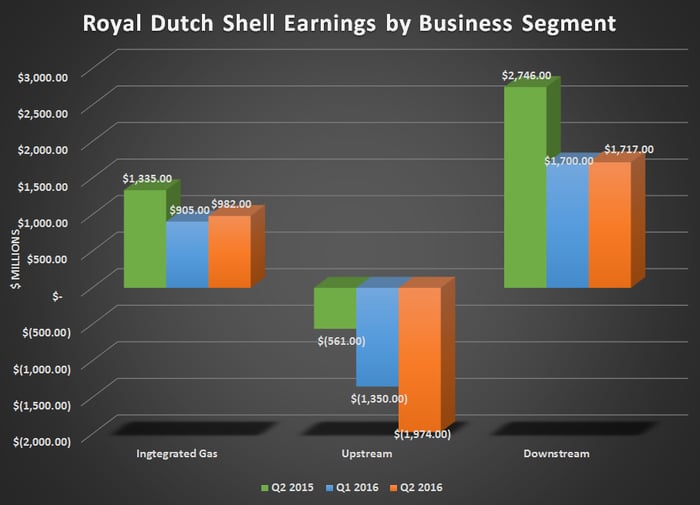 On the cash front, Shell's results were better, but not by much. The company generated $2.2 billion in cash for the quarter, and that came nowhere close to meeting its quarterly capital expenditures of $5.8 billion. Investors can perhaps forgive weaker results since the company's realized natural gas prices slipped a bit in the quarter, but it has been touting cost-cutting that just doesn't seem to be flowing to the bottom line. To cover the cash shortfall, it issued $9.7 billion in new debt, and its debt-to-capital ratio of 28.1% is starting to reach the top of its target range.

In spite of the results, CEO Ben Van Beurden continued to toe the company line about lowering costs and working through the integration of BG Group:

We are managing the company through the down-cycle by reducing costs, by delivering on lower and more predictable investment levels, executing our asset sales plans and starting up profitable new projects. At the same time, integration of Shell and BG is making strong progress, and our operating performance continues to further improve.

We are making significant and lasting changes to Shell's working practices and cost structure. Shell is firmly on track to deliver a $40 billion underlying operating cost run rate at the end of 2016.

Looking through the cycle, our investment plans and portfolio actions are focused firmly on reshaping Shell into a world-class investment case through stronger, sustained and growing free cash flow per share.

In Shell's defense, it's way too early to say if the BG Group acquisition is a stud or a dud. It still has a lot of work to do in bringing the two operating companies together under a common platform and identify some places where it can either trim the fat or beef up operations. Based on this initial result, though, things aren't looking great. Oil prices did rise in the quarter, yet Shell's upstream business generated even deeper losses. Investors should certainly give the company more time to work through this transformation, but we're going to have to start to see some form of improvement in the coming quarters.