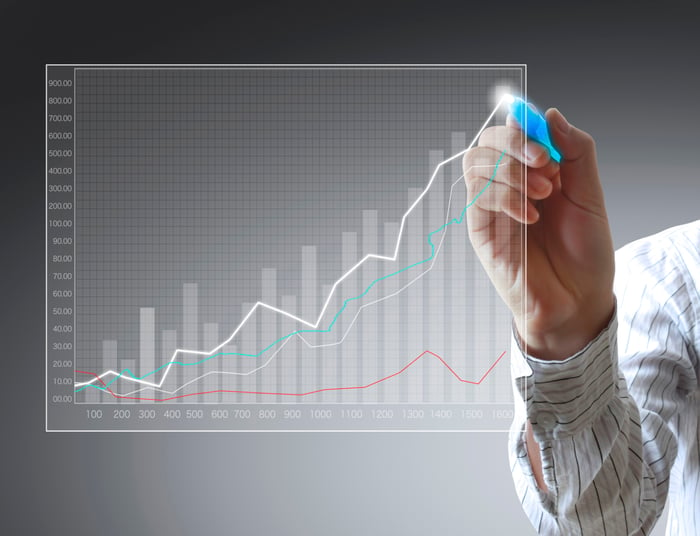 Despite the Dow Jones Industrial Average (DJINDICES:^DJI) and S&P 500 (SNPINDEX:^GSPC) logging gains on Friday thanks to oil prices rising, both basically traded flat for the week, ending lower by 0.75% and 0.07%, respectively. Investors will take what they can get, though, especially since U.S. Gross Domestic Product (GDP) data was disappointing.

The U.S. economy grew at a slower pace than expected during the second quarter, recording a meager 1.2% annual growth rate. At the same time, it was announced that first-quarter growth was reduced from the prior estimate of 1.1% down to 0.8%.

With that slightly pessimistic news out of the way, let's look at some of the positive events from the week.

It was a great week for investors in Sprint (NYSE:S) as the telecom company jumped about 25% on Monday alone, and trended to an even higher 32% gain for the full week. The move higher was due to the company's solid first-quarter results, which boasted revenue that topped analyst expectations, and the highest first-quarter postpaid phone net additions in nine years.

Management is looking for operating income for fiscal 2016 to check in between $1 billion and $1.5 billion, which is much improved from the $310 million over the trailing 12-month period. It's definitely a step in the right direction for Sprint amid its turnaround efforts, but the near term is still very uncertain, and a 32% jump this week might be a bit premature.

Shares of Linear Technology (NASDAQ:LLTC) also had a very favorable week, trading 25% higher following a Bloomberg report that said Analog Devices (NASDAQ:ADI) was in extensive talks to buy the company. Bloomberg nailed it, too, as Analog soon agreed to acquire Linear Technology for roughly $14.8 billion.

Digging into the details, Analog will pay $60 per share for the company, in cash and stock, which was a 24% premium to its closing price on Monday. The transaction should officially close by the first half of 2017. To fund the move, Analog plans to issue 58 million new shares, and $7.3 billion of new long-term debt.

It's a smart move for Analog as the company tries to grow its size, and scale to better compete with the industry leader, Texas Instruments Inc. Analog specializes in data converters and chips that help translate human interactions, like pressing a button, into electronic signals, and this acquisition will give it access to chips that control power in devices.

Ultimately, this is just another domino falling in the semiconductor industry, which had mergers at a record pace last year.

We can't have an optimistic market wrap-up without mentioning Facebook's (NASDAQ:FB) impressive quarter. The company easily topped all expectations with strong ad-revenue and user growth.

The social-networking leader posted total advertising revenue growth of 63% compared to the prior year, to $6.2 billion. That was pushed higher thanks to a 15% and 17% increase in monthly average users (MAUs), and daily active users (DAUs), respectively.

Looking at regions, Facebook's ad revenue grew 69% compared to the prior year in the U.S. and Canada regions, as well as 67% in Asia. There was good news on the mobile front, too. Facebook's mobile users increased by 20% from the prior year, which pushed mobile revenue to represent 84% of total ad revenue.

Further, operating margins expanded, gross margin moved higher, and operating expenses declined as a percentage of revenue. It would be difficult to find anything negative in Facebook's financials during the quarter.

However, management noted that it expects deceleration in the top-line growth during the back half of 2016, and possibly 2017. But still, that's one heck of a second quarter.