Gold and silver have had an impressive run so far this year. Not surprisingly, precious metals stocks have followed along for the ride. That said, not all precious metals stocks are the same. Royal Gold, Inc. (NASDAQ:RGLD) and Newmont Mining (NYSE:NEM), for example, offer up two different ways to play the space. And which one is the better buy for you depends a lot on how you look at the world.

Newmont Mining is a miner. It finds places where it thinks gold is hidden in the ground, builds mines, and then, if it was right, mines for gold. Just finding a good location is a difficult process that can take years. And building a mine is another expensive and lengthy process with no cash coming in until the project is complete. When the mine is finally up and running, while money is finally being made from the mine, there's another set of risks, including the inherent dangers of working a mine and labor relations, among many others.

Royal Gold doesn't get involved in all of that. It gives cash to miners in exchange for the right to buy gold and silver in the future at reduced rates. It's basically signing what are called royalty and streaming deals. Royal Gold likes this arrangement because it gets precious metals on the cheap. Miners like it because it is often a cheaper financing alternative than issuing stock, selling bonds, or asking a bank for money. Generally miners use the cash to build new mines, but at times they use the cash to pay down debt.

That's the basic difference between the two companies when you pit them head to head. One thing that isn't different, however, is that often volatile precious metals prices will determine just how much money these companies earn. And, thus, how much investors are going to pay for the shares.

That said, Royal Gold has done something that's pretty unique in the precious metals space. It's raised its dividend for 15 consecutive years. Although the pace of dividend growth has been relatively slow the last couple of years during the precious metals downturn, the compound annual growth rate over the full span has been an impressive 20% or so. 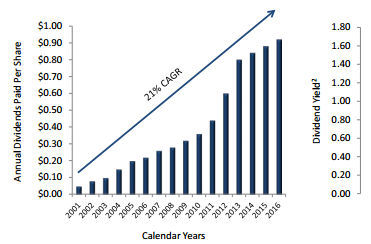 Newmont Mining's dividend goes up and down depending on the price of gold. For example, between 2009 and 2012, the dividend went from $0.40 a share to $1.40. But it fell to $0.10 a share in 2015. So, if you are a dividend-focused investor interested in regular quarterly dividend checks, Royal Gold is likely to be the better choice.

That said, if you are looking for an investment with upside potential, Newmont may end up being the better play. That's because it has more control over its destiny by running its own mines. Royal Gold's future, in many ways, depends on what its mine partners do. For example, facing increasing pressure on its revenue, Newmont started to cut costs -- in a big way.

In 2012, Newmont's all-in sustaining costs were over $1,120 an ounce for gold. All in sustaining costs is an industry metric that shows how much it costs to pull an ounce of gold out of the ground. As of the second quarter of 2016 it has gotten that number down to $852 an ounce. With gold on the upswing again and the company's costs lower than they have been in years, Newmont is highly leveraged to the upturn. The stock has advanced a heady 120% this year. And Newmont can use any extra profits to internally fund expansion projects again. 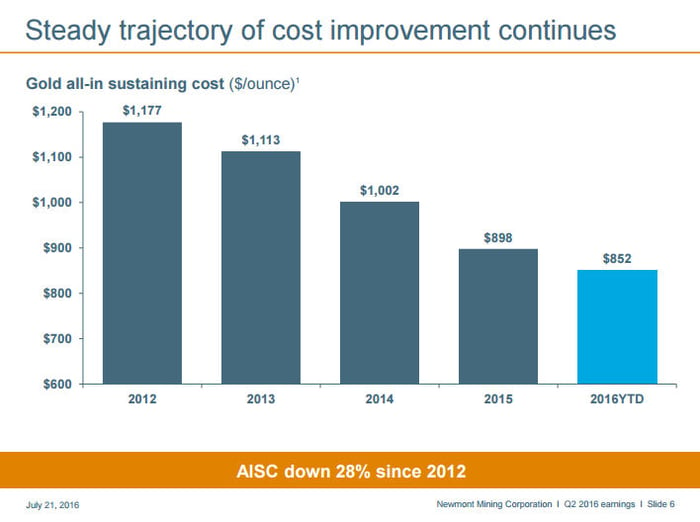 While Royal Gold's costs are low, it figures its cost spread over the reserves it has is around $450 an ounce, they are pretty much set in stone based on the contracts it has. Yes, it's in better position to deal with weak gold prices, but it doesn't have the same upside potential from adjusting its business to the times because there's nothing to adjust.

That hasn't mattered so much lately because Royal Gold used the downturn to ink new streaming deals while miners were desperate for cash. Its reserves increased over 20% in 2015 because of these investments. Which helps explain why Royal Gold's shares are up an impressive 110% this year.

However, during flush times, miners could be less willing to deal with streaming companies and that would limit Royal Gold's growth potential at exactly the same time that Newmont's growth potential could really be taking off. In other words, Royal Gold is likely to be a steadier stock, which time has proven to be the case, but it probably won't have the same turnaround potential as a miner like Newmont, if you are looking for big stock moves.

At the end of the day, who you are as an investor will really determine which of these two precious metals companies you prefer. For income-focused investors interested in sleeping well at night, Royal Gold is probably the right call for precious metals exposure. However, if you like things a little more exciting and crave capital appreciation, Newmont will probably be more to your liking because of its direct exposure to the mining process and tighter control of its own destiny.