Starbucks (NASDAQ:SBUX) reported earnings at the end of July, and the results were impressive. The coffee giant achieved record third quarter revenue, record profits, and record operating margins. However, its stock is not quite trading at matching record levels.

At about $57 per share, the stock is well below its all-time highs reached last October. Given the strength of Starbucks' business, brand, and growth plans, long-term investors may have an attractive buying opportunity at hand.

When it comes to evaluating the operations and growth of a food and beverage company, I typically like to focus on two metrics: same-store sales and restaurant-level operating margins.

Growth in the former is driven by two factors: an increase in average ticket price and traffic growth. Increasing average tickets are a good sign of pricing power and the company's ability to upsell customers, while growing foot traffic is an equally (if not more) important metric. A rise in traffic can reflect the popularity of the brand, customer loyalty, and the ability to obtain new customers. A combination of the two metrics drives the total comps number, and Starbucks has more than impressed here. 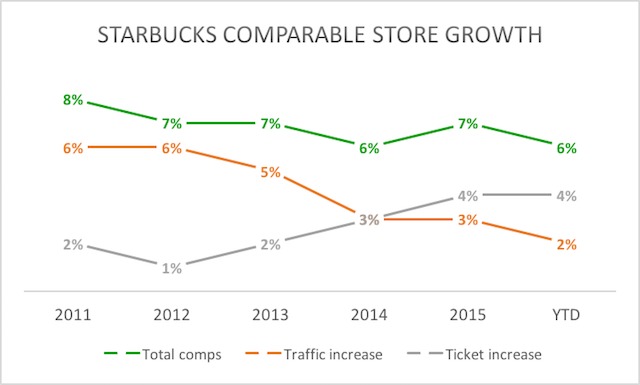 For a company in its 31st year of existence, growing comparable sales between 6% and 8% per year for the last five-plus years is remarkable. The decrease in traffic is a bit of concern, as it has slowed to zero in the last reported quarter and 2% year-to-date. However, a strong management team has navigated through slowing growth previously, and it should be able to do so again. When addressing analysts during the earnings call, CEO Howard Schultz said:

As many of you have covered Starbucks for some time, you have seen us occasionally experience periods of slower growth in our U.S. business, only to see the business rebound with greater strength and vigor in the quarters that follow. This is precisely the pattern I personally believe you're going to see as we head into fiscal 2017 and beyond.

As far as restaurant-level efficiency goes, the company just released record numbers. GAAP operating margins came in at 19.5%, an increase of 30 basis points over the prior-year period. Year-to-date, Starbucks is now producing operating margins of 18.9%, a significant improvement over the past five-plus years. As the coffee giant grows, it has been able to improve its operational efficiency and leverage its costs to produce consistently better results. 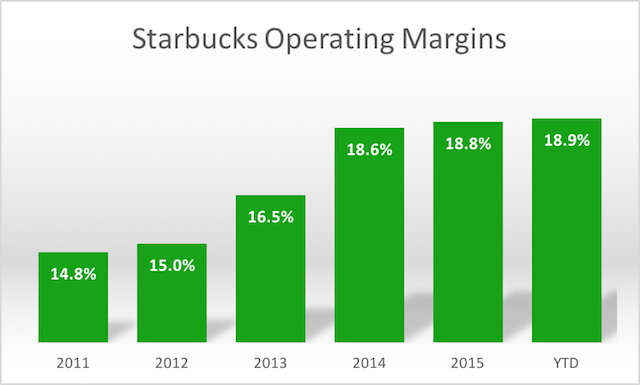 Restaurants are typically a tough industry for long-term investors as few players can develop and sustain a strong competitive advantage. Copy cats are typically able to come in and create a similar or better product at cheaper prices, eroding profitability and growth for the entire industry. One way to position itself against the competition is to create a strong, well-known, and trustworthy brand -- Starbucks has done just that.

There are only three restaurants in the highly respected Best Global Brands list. Starbucks climbed 10 spots from the previous year to rank No. 67 in 2015. It is the second-best ranked restaurant behind McDonald's. With an aggressive expansion plan, innovative technology, and new retail offerings, Starbucks should continue to increase its brand strength across the globe.

As far as revenue goes, Starbucks expects to approach $30 billion by 2019, up from about $20.5 billion in its latest 12 months. Unlike many companies who sacrifice profits for growth, Starbucks should continue to leverage operating expenses to continue to increase margins and profitability. Although ambitious, Starbucks' growth targets should be achievable, making today's prices enticing.

The stock currently trades for 4.1 times trailing 12 month revenue and 23.3 times operating income. Its market capitalization is $84.5 billion. If the company is able to hits its $30 billion revenue target, achieve 18.5% operating margins (below current levels), and continue to trade at today's multiples, Starbucks would be an approximately $125 billion company in 2019 -- a valuation that would imply over 14% annualized returns.

With those numbers in mind, however, if the price of stocks come down broadly, Starbucks' trading multiples will similarly fall. A 14% annual return on a company as frequently covered by analysts as Starbucks may be a long shot, but today's price does imply an attractive margin of safety, even if the market encounters a downturn.

If the company's valuation doesn't change from current levels, with those 2019 revenue and profit numbers, Starbucks would trade at less than three times revenue and 15 times operating income, levels not seen since 2012 and 2013. I don't see this happening, as the company is a much stronger business than it was just three to four years ago -- the higher multiples are justified.

Wall Street currently sees Starbucks as a company with declining traffic that will shrink further in a slowing global economy. However, long-term investors should see the company's strong track record and one of the world's most recognizable brands. If it can hit the targets set by management, current price levels should provide investors the opportunity to pick up a great company at a good price.