Please ensure Javascript is enabled for purposes of website accessibility
Log In Help Join The Motley Fool
Free Article Join Over 1 Million Premium Members And Get More In-Depth Stock Guidance and Research
By Jeremy Bowman - Aug 2, 2016 at 8:33AM

What: Shares of Garmin Ltd. (GRMN -0.13%) jumped 28% last month according to data from S&P Global Market Intelligence, boosted by a strong second-quarter earnings report. As you can see from the chart below, the bulk of the gains came on the day the earnings report came out. 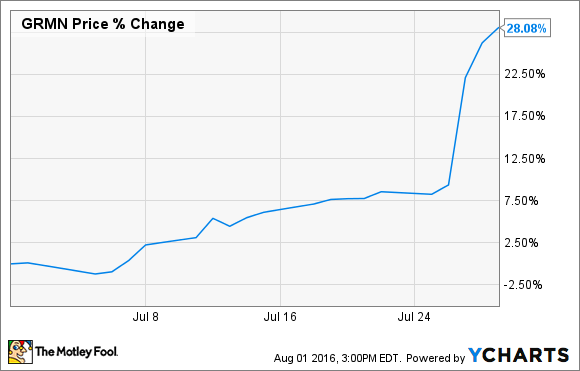 So what: The maker of fitness and navigation gadgets roared past analyst estimates, posting an adjusted earnings per share of $0.87 against estimates of $0.67, and up from $0.72 a year ago, while revenue ticked up 5% to $812 million, much better than the analyst consensus at $763 million.

As the market for GPS devices that Garmin once dominated is getting swallowed by smartphones, the company is successfully pivoting to other devices for fitness, sleep tracking, and outdoor purposes in categories like golf, aviation, and marine. Revenue from its auto category, which is still the largest, fell 18%, but growth in areas like fitness, which increased 34%, more than made up for it. Outside of auto, revenue increased 20% in the quarter. Margins also rose with the transition as CEO Cliff Pemble said he was "pleased with the performance in the first half of 2016."

With its strength in wearable devices and well-known brand name, Garmin may be a hidden winner in the growing sector. Though the stock has been mostly flat over the last five years, it's now near a post-recession high. Unlike many other tech companies, Garmin also offers a fat dividend yield at 3.8%. As wearables become more popular and the auto decline smooths out, Garmin shares should continue to move higher.