What: Shares of Cognex Corp. (NASDAQ:CGNX), a provider of machine vision systems, soared on Tuesday following the company's second-quarter report. Cognex beat analyst estimates on all fronts and provided guidance calling for significant year-over-year revenue growth during the third quarter. At 11:00 a.m. EDT, the stock was up about 16%.

So what: Cognex reported second-quarter revenue of $147.3 million, up 2.4% year over year and $9 million higher than analysts were expecting. The company pointed to better-than-expected results from the consumer electronics, automotive, and logistics industries as the main driver behind its revenue growth.

EPS from continuing operations came in at $0.50, up from $0.49 during the prior-year period and $0.07 higher than the average analyst estimate. Despite the EPS growth, operating income declined slightly year over year due to a lower gross margin.

Cognex expects to produce between $142 million and $147 million of revenue during the third quarter. This compares to just $108 million during the third quarter of 2015. The company is basing this guidance on the expectation that it will receive large orders from the consumer electronics industry, along with strong performance from other industries, like logistics. 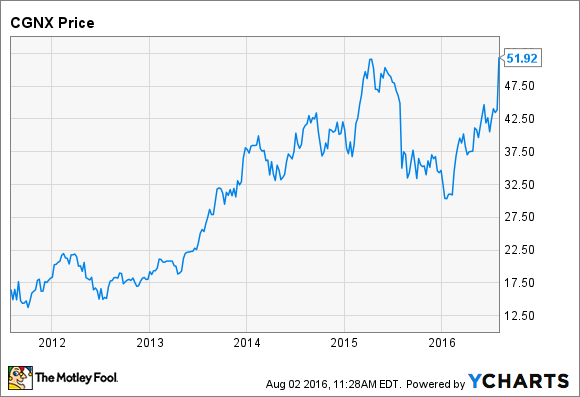 Now what: With Cognex reporting better-than-expected results and guiding for a significant jump in revenue next quarter, it's no surprise that investors are pushing the stock price higher. Tuesday's jump created a new 52-week high, pushing the stock above levels reached last year. The stock now trades at a premium, about 43 times the average analyst estimate for 2016 earnings. But strong results and guidance was enough to convince investors to pay up for the stock.