If you look hard enough, there are actually some signs that Nabors Industries' (NYSE:NBR) financial situation is starting to improve. No, you won't find it in the $0.65 per share loss that the company posted this quarter, it's in the company's balance sheet where it's starting to look like a better company. Let's take a look at Nabors' most recent earnings results to see how the company is actually starting to get its debt levels under control and what that means for Nabors as a potential investment in the future.

Nabors' results weren't great by any means, but they aren't quite as bad as the paper losses show. The company realized a $0.34 per share loss on its carrying equity value in C&J Energy Services that filed for chapter 11 bankruptcy this past month. This is a non cash equity impairment and doesn't necessarily reflect the company's ability to generate cash. For the six month period, the company generated $336 million that was in excess of capital spending and even allowed the company to trim its debt by $148 million.

At the end of the quarter, the company reported that total long term debt outstanding was $3.5 billion with $256 million in cash on hand. It's still a high level of debt compared to some of its peers, but its the lowest its debt load has been in six years and is a much more manageable situation than what the company was facing before.

For the most part, Nabors' decline in earnings year over year was a reflection of the overall market for rigs in general. The active rig count in the US declined throughout the quarter and only started to increase at the end of the quarter. Nabors averaged 44 active rigs in the US for the quarter. The company did note, though, that it did get a little revenue bump from increased standby revenue on its MODS 400 offshore platform rig for the Gulf of Mexico.

The company also saw a small uptick in its international segment compared to the prior quarter. Most of those gains were made because of lower operational costs rather than any gain in revenue. 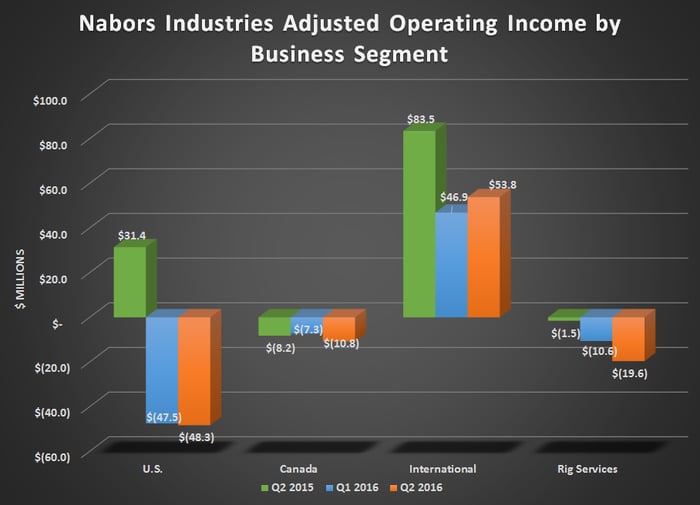 According to management, it believes that it will start to see an uptick in drilling activity both in the US and Internationally in the coming quarters. One issue with this thesis is the company made it based on oil prices remaining in the $50 per barrel range. In the past few weeks, we have seen prices decline back to the $40 range, which could send drilling activity in the other direction.

Nabors Industries has been in a tricky spot over the past several years. The onshore rig market has changed dramatically as more and more companies are shale drilling and require newer, higher specification rigs. This means that Nabors has had to find a way to turn over its fleet while managing its bloated balance sheet. Now that drilling activity is on the decline, the company's primary focus is controlling costs and maintaining balance sheet flexibility. According to CFO William Restrepo, the company is making a lot of headway in that direction.

Our company's strategy and preparation continue to contain the damage inflicted by the severity and length of the current downturn.  Capital allocation over the past five years to international markets with lower cost reservoirs, as well as intense focus on developing advanced drilling technologies, have helped us continue to perform well nearly two years into this downturn. Early actions to control cost and capital expenditures have also contributed to the positive free cash flow that we had anticipated. Finally, the steps taken to strengthen our liquidity position before the start of this downturn have proven extremely valuable and have prevented the need for onerous capital market transactions in a very unfavorable environment.  In addition to our current cash balances, our $2.25 billion revolver remains undrawn. And although we see signs of improvement in both international and U.S. markets, we remain committed to maintaining liquidity and financial discipline, while targeting positive free cash flow during the remainder of the year.

The more and more that Nabors reduces its debt load and converts its fleet of rigs to handle complex shale drilling jobs, the more attractive the company's stock looks. This earnings report may have some large losses in it, but it is still making baby steps in the right direction. This company still needs to lower its debt load and probably shed some of its legacy assets before investors should take a serious look at this company, but the situation looks much more hopeful than it has in prior quarters.