For several quarters, Calumet Specialty Products Partners (NASDAQ:CLMT) has been stuck in a downward spiral. Lower refining margins across the entire industry was putting the hurt on the company at a time when it needs it the most. This quarter's results look particularly bad on paper, but part of that has to do with making the tough decisions to hopefully turn this company around. Here's a quick snapshot of the company's most recent results and what they mean going forward.

There hasn't been much to cheer in Calumet's earnings results over the past several quarters. The company's struggles with unprofitable assets and an onerous debt load have led the company to suspend its payout to shareholders. This quarter's results are heavily skewed by one time items, though. The company realized net charges of $119 million for the quarter. Most of that was related to the divestiture of its 50% stake in Dakota Prairie Refining. If we strip out these charges, earnings would have been much more palatable.

If there is one thing that you can give the company credit for, its that the company's specialty products segment has remained remarkably consistent. Even this past quarter where refining margins were on a steep decline from this time last year, Calumet's specialty products segment continues to churn out consistent operating profits. Management even noted that it was able to increase prices across much of its specialty product segment to help offset the lower refining margins. That's something that not many refiners have been able to do this quarter.

If only the same could be said for the rest of the business... 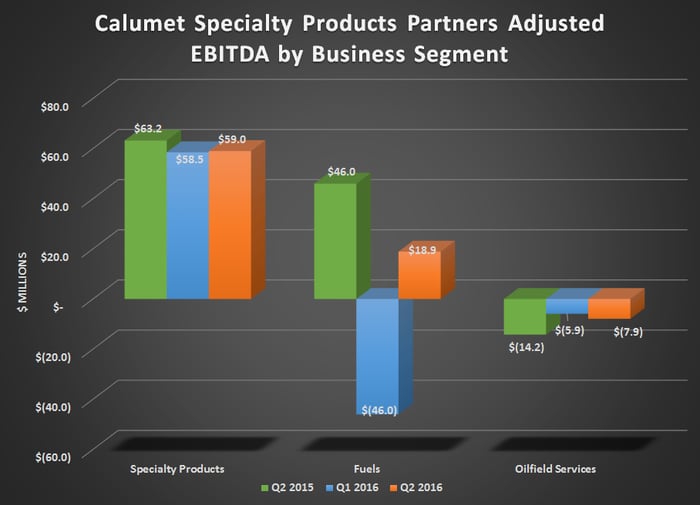 On a more discouraging note, the company's operations continue to consume rather than generate cash. Add the $51 million operational cash burn with the $98 million used for capital spending over the past 6 months and you get a company that is still wholly reliant on debt to keep the lights on.

This isn't something it it going to be able to do for much longer, though. The company's most recent issuance of notes came with an 11% coupon rate. It's going to be extremely hard to find returns within the business high enough to pay off those kinds of debt charges long term

The highlights (if you want to call them that)

The most important thing that Calumet did this past quarter was divest itself of its interest in the Dakota Prairie Refining venture. When the project was originally conceived, the idea of making diesel in the Bakken region of North Dakota seemed like a no brainer. Crude oil in the region was some of the cheapest in the country while diesel prices were some of the highest as drillers were guzzling the stuff at rapid rates. Unfortunately, the Bakken shale boom has bust and the company was never able to get the facilities costs under control.

So rather than hold on for better days, Calumet made the right decision and got rid of the asset. It may have been a big write down this past quarter, but better to take a large non-cash charge today than watch the facility slowly bleed cash for multiple quarters into the future. Another added benefit will be to reduce the company's exposure to its fuels segment and allow it to focus more on what it does best: Specialty Products.

A few months back, CEO Timothy Go outlined a strategic plan to return to profitability, as part of this quarter's results, he highlighted some of that progress:

Targeted cost reductions and disciplined expense management have resulted in significant savings on a year-to-date basis. Total selling, general and administrative expenses declined $38 million in the first half of 2016, when compared to the prior year period. We continue to source increased volumes of cost-advantaged feedstock in our refining system, resulting in a lower overall per barrel delivered cost of crude oil. In the second quarter 2016, we processed a record 35,600 bpd of cost-advantaged heavy Canadian crude oil at our Superior and Great Falls refineries. Although specialty products sales volumes increased on a year-over-year basis in the second quarter 2016, a rapid escalation in crude oil prices during the period impacted segment gross profit. We enacted price increases in the specialty products segment in June 2016, in response to higher feedstock costs.

Looking ahead to the third quarter 2016, we anticipate increased margin capture within our specialty products segment, following recent price increases. In our fuel products segment, we continue to sell gasoline, distillate and jet fuel at a premium to the Gulf Coast in our local markets, although benchmark refined product margins remain constrained by elevated domestic fuel products inventories. We expect our asphalt business to reach a seasonal peak in the third quarter, allowing for the conversion of existing asphalt inventory to cash ahead of the winter.

If you may have noticed, there was little talk of the company's oilfield services segment. Considering its poor performance over the years, don't be surprised if it goes the way of its Dakota Prairie investment.

Calumet's turnaround plans aren't going to happen overnight, there are just way too many overhangs with unprofitable business segments and debt loads before the company will be able to repair all the financial damage that has happened to it. Divesting itself of one unprofitable segment is a start, and leaning heavily on its specialty products segment will likely be the best path forward. From an investor standpoint, the company has a lot to prove before it can be considered an investment worth making.