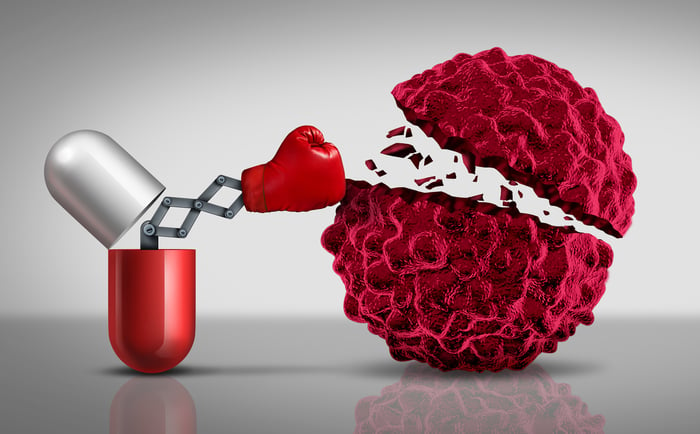 What: Shares of Clovis Oncology (NASDAQ:CLVS), a clinical-stage drug developer primarily focused on the development of therapies to treat cancer, surged as much as 15% during Friday's trading session, based on data from S&P Global Market Intelligence, after SunTrust Robinson Humphrey initiated coverage on the company.

So what: According to the note put out by SunTrust Robinson Humphrey earlier this morning, Clovis has been initiated with a "buy" rating and a $25 price target. Clovis Oncology closed at $15.44 on Thursday, which implies that SunTrust Robinson Humphrey sees upside in the stock of more than 60%. Eight research companies currently have a price target on Clovis, with those targets ranging from a low of $11 to a high of $30. The median is $17.50, which is practically where Clovis closed today.

The coverage initiation also comes just one trading day before Clovis is set to report its second-quarter earnings results. With no currently approved drugs, investors will be hoping that Clovis loses less on a per-share basis than Wall Street is estimating.

Now what: Though analyst coverage can be nice for a quick boost from time to time, the opinions of Wall Street, along with their price targets, are rarely going to have any bearing on your investment thesis. In other words, if you're long Clovis Oncology, you're welcome to enjoy the sun a bit more this weekend, but this is far from a long-term share price driver.

Instead, your attention should be focused on lead drug candidate rucaparib, which is a PARP inhibitor designed to treat ovarian cancer. The real gold for Clovis would be if rucaparib is eventually approved for early-stage ovarian cancer cases, but for now, it needs to get its foot in the door as a late-stage or maintenance therapy. There's the potential that Clovis Oncology may be able to forgo an expensive and long phase 3 study with rucaparib in treatment-experienced ovarian cancer patients since it's already initiated a rolling submission with the FDA, but there's no guarantee this will happen. If approved, though, rucaparib could net up to $1 billion in peak annual sales, assuming it garners label expansion opportunities in the future.

I'd suggest sticking to the sidelines for now. Clovis burned shareholders badly after it announced in November that previous lead drug rociletinib had produced a lower response rate than initially reported in a specific mutation of lung cancer. Worst yet, Clovis' management was aware of the lower response rate for weeks prior to reporting the data to shareholders. This management team lost my trust last year, and I'd be hesitant to dive back in until we have concretely positive news from the FDA.

Here's Why Clovis Oncology, Inc. Catapulted As Much As 15% on Friday @themotleyfool #stocks $CLVS Next Article
Current