Under Armour, Inc. (NYSE:UAA) (NYSE:UA) was able to carve out another great quarter. Net revenues grew 28%, marking the 25th straight quarter of revenue growth above 20%. Other highlights included:

The third quarter wasn't all roses, though. The stock is down over 8% since the July 26 earnings announcement. In addition to the write-down related to Sports Authority's bankruptcy, inventory levels grew faster than sales for the fourth straight quarter. 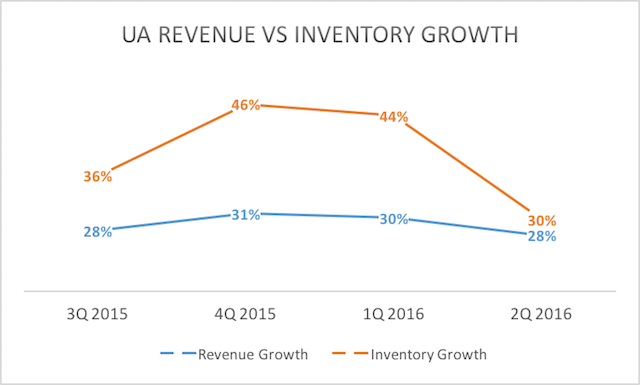 One of the largest risks of storing excess inventory is the risk of obsolescence. Companies want to make sure there is enough inventory to meet customer demand, but having too much of it can mean retailers will have to offer large discounts to move product. With apparel, there is even more urgency to turn that inventory over, as seasons and customer preferences change rather quickly. Excess inventory will often lead to discounting, which ultimately leads to lower profits.

Under Armour is seeing that situation play out, as gross margins have weakened in step with its accelerated inventory growth. Over the past four quarters, gross margin has declined 0.6%, 1%, 1.9%, and 0.8% from the prior year. In fairness, the entire decline can't be attributed to inventory that's growing faster than sales. Higher footwear and international business, both of which carry lower margins, have also contributed to the decrease.

Carrying high inventory levels also affects a company's ability to churn out cash. Inventory sitting in warehouses means companies are paying manufacturers but not receiving cash from customers. The cash conversion cycle, or CCC, measures the number of days cash is tied up in working capital (inventory, accounts payable, and accounts receivable). The faster a company can sell its inventory and collect from customers, the faster that company can use cash for other purposes, including reinvestment in its own business. For Under Armour, that metric increased significantly over the past year. 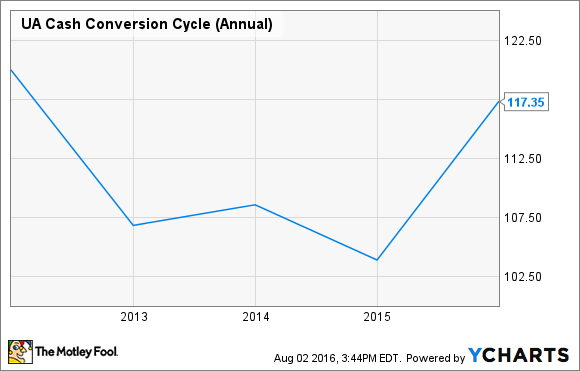 An increase of CCC from 103 to 117 means Under Armour is collecting cash 14 days slower than it has in the past. The company expects to reach about $5 billion in revenue this year, which translates to sales of $13.7 million per day. Therefore, by slowing its CCC by 14 days, Under Armour is essentially leaving over $190 million tied up in working capital.

Although Under Armour has increased inventory faster than sales for a full year, investors can take solace in knowing that this was all intentional. In September, Under Armour management prepared investors for higher inventory levels in 2016:

[O]ver the course of the rest of this year and through 2016, we are focused on delivering our products to our consumers more timely, specifically on key seasonal floor set dates. This focus specifically in comparison to some prior years' challenges will result in elevated inventory growth rates over this time frame to flow product earlier.

Given its high growth rates, Under Armour has been challenged in the past to ensure it can meet customer demand on a timely basis. By consciously increasing inventory levels, management hopes to not see this issue pop up again 2016. The company should now consider itself ramped up for the critical back-to-school and holiday shopping seasons. Going forward, investors should see inventory levels get back to normal. CFO Chip Mollay confirmed the same on its most recent investor call: "As we noted last quarter, we are beginning to anniversary the strategic inventory investments that we implemented in the second quarter of last year and expect the growth in inventory to remain relatively in line with sales throughout the remainder of the year."

There is already evidence that Under Armour is making good on its strategy. As shown on the chart earlier, inventory growth did come down closer to sales growth in the second quarter.

This year has been one of investment for Under Armour. The company has invested heavily in its digital business and in growing internationally. In June, the company also made its first bond offering, raising $600 million. Raising inventory levels is another way the company is investing in itself for the future.

Like all investments, there is risk. For Under Armour, that risk is the potential of heavy discounting and writing off inventory. However, given the track record of Kevin Plank and the Under Armour management team, I believe this risk will pay off handsomely.