Investors were quick to sell shares of Ritchie Bros. after a disappointing second quarter, but this appears to be more of a speed bump than anything else.

What: Shares of Ritchie Bros. Auctioneers (RBA 0.82%) are reversing after trending higher throughout 2016 and are dropping 11% Tuesday afternoon, after second-quarter results fell short of Wall Street expectations.

There were multiple factors putting pressure on the company's second-quarter results. Ritchie Bros. noted that there was a sudden decline in global equipment pricing in June, throughout multiple sectors, because of an imbalance between supply and demand. That's an issue that seems to be working itself out, as management indicates that pricing appears to be stabilizing. Results were also negatively affected by increasing competitive pressure and higher operational and G&A costs.

Now what: There was a bit of a silver lining for investors, though. "Nevertheless, we are encouraged by our strong July performance, with GAP [gross auction proceeds] up 8%, indications that pricing may be stabilizing, and a robust pipeline going into the rest of the year. We are also excited that more than half of our GAP in Q2 was generated online, which reinforces that our multichannel and digital strategy is gaining momentum." said CEO Ravi Saligram in a press release.

That the digital strategy is gaining momentum is a good sign of things to come, with the potential for the momentum to continue throughout the remainder of 2016. 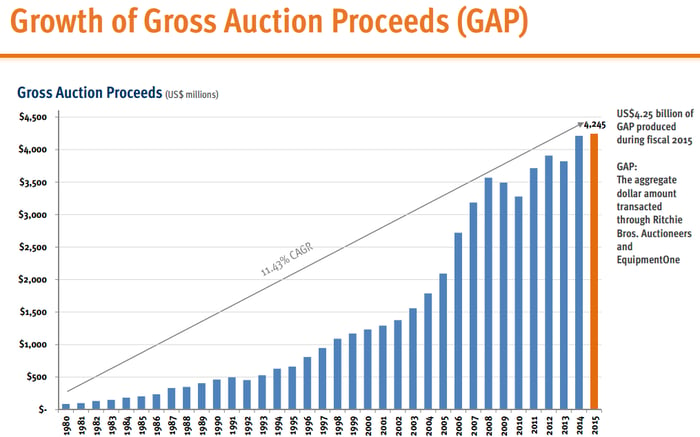 Ritchie Bros. has a long history of growing its auction business, and while the company struggled to reach estimates during the second quarter, it seems more akin to a speed bump than a derailed company. As pricing stabilizes and the company continues to focus on its digital strategy, expect better days ahead.