Starbucks' revenue may be less predictable from quarter to quarter in the coming years. Why shareholders shouldn't be overly concerned.

In the dominant headline from Starbucks Corporation's (SBUX -4.21%) fiscal third-quarter earnings released last month, U.S. comparable-store sales increased just 4%, breaking a 25-quarter streak of comps growth at or above 5%. Management insisted that the performance in its Americas segment was an anomaly. It chalked events up to poor timing as a "once in a decade" revamp of Starbucks' rewards program, which was launched against the company's annual "Frappuccino Happy Hour" program, diluting the success of both initiatives.

The message, confidently delivered, was that U.S. comps would bounce back pretty much immediately. Starbucks stated that it has a "clear line of sight" into the resumption of 5%-plus U.S. comps.

That the company has to assert this at all shows how much investors and management now regard the comps streak as a long-term measure against which we should take the pulse of Starbucks' growth. Yet the prospect of endless quarters throwing off comps that race past the rate of consumer price inflation and the growth of the retail food and beverage market, in general, doesn't quite seem sustainable, does it?

Not to call the beginning of a trend, but if we concentrate only on this quarter, it's clear that weaker revenue growth wasn't confined to the U.S. Overall global comps of 4% proved a slight disappointment to investors, and the typically vibrant China Asia Pacific (CAP) segment achieved growth of just 3%, despite a 7% comps spurt in China.

Management seems to grasp that external forces, currently in the form of a tentative global economy, can stymie even well-executed plans. During the company's earnings conference call, CEO Howard Schultz acknowledged that customers' feelings of financial well-being can directly pressure sales, even for a product as addictive as coffee:

What we did not and could not have fully anticipated was the profound weakening in consumer confidence in Q3 that has caused sharp declines in QSR and restaurant traffic overall, and has many of our competitors struggling with negative transaction comps.

As I have mentioned in the past, Starbucks is not immune to macro challenges that impact our competitors and retail overall. But as with weather, we will not hold these challenges out as excuses. Instead, we will successfully manage and navigate through them as we always have.

Checking revenue assumptions at the door

Through mild and inclement weather, Starbucks investors have become habituated to that steady cadence of rising comps as a means to increase operating leverage. Yet going forward, it's important to consider Starbucks' many non-store growth investments, which have their own distinct margins, and differing payback periods. Some of the company's most-promising investments have little to do with comps, or even top-line revenue for that matter. Take a moment to scan through the following image from Starbucks' Q3 2016 report: 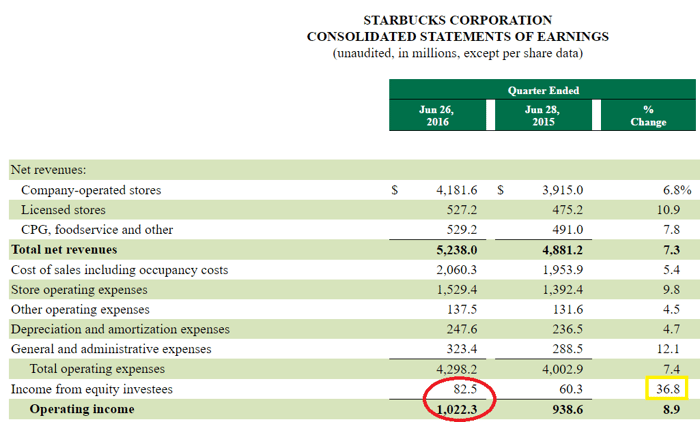 In this detail from Starbucks' condensed statement of operations, you can see that the organization counted $82.5 million in income from equity investees in Q3 2016. This particular line item has been expanding steadily as of late; it's now equal to 8% of total operating income, and was, by far, the fastest-growing component of operating income during the quarter, at nearly 37% expansion versus the prior year.

"Equity investees" include the partnership interests Starbucks undertakes with entities that license and operate its stores in key global markets -- for example, President Starbucks Coffee in Shanghai, and Tata Starbucks Limited in India. But this line item also contains Starbucks' interest in its joint venture with PepsiCo (PEP 1.01%), the so-called "North American Coffee Partnership," which manufactures and distributes Starbucks' ready-to-drink coffees, such as bottled Frappuccinos, to grocery and convenience retail venues.

None of this revenue is included in net revenue at the top of the income statement. But as is evident above, the investments in partnerships are increasingly vital to company-wide profit. Starbucks is finalizing agreements for yet another wide-scale bottling venture, this time with Anheuser-Busch InBev (BUD 1.18%), to manufacture and distribute Teavana-branded ready-to-drink tea in 2017.

Similarly, Starbucks' upcoming launch of single-serve Nespresso pods in Europe this fall represents an allocation of resources outside the store format. While a portion of pod sales will indeed occur within Starbucks locations, management will seek a more-pervasive distribution via grocery aisles, as with K-Cups in the U.S., and those sales will be recorded in the company's channel development segment.

The next 25 quarters: more revenue volatility, but higher profits

This formula has helped support a 12% revenue compounded annual growth rate, or CAGR, over the last five years. And it undergirds a seven-point strategy announced in December 2014, which aims to take Starbucks to $30 billion in revenue within five years, implying a still-ambitious 10% annual CAGR through fiscal 2019.

Well before 2019, however, investors may see revenue dip and surge from quarter to quarter in a manner we haven't seen much of recently. The company is reaching a scale, not to mention a geographical ubiquity in which it's simply more sensitive to global macroeconomic fluctuations. Continued investment outside of Starbucks' core retail business model may ease this loss of top-line predictability -- with the soothing balm of higher profits.