Skechers (NYSE:SKX) stock got beat up after earnings on July 21, posting its lowest sales growth in over four years. What happened that caused the stock to drop? With back-to-school shopping right around the corner, should investors forget this report and scoop up some more shares?

Revenue was up 9.7% from a year ago and set a second-quarter record at $877.8 million. The growth was driven primarily by increases at company-owned retail stores and the international business. International sales specifically made up 41.9% of revenue as the company continues to grow its store footprint overseas with new openings.

This offset slowing in U.S. sales of 5.4% at the wholesale business and growth of 15.4% at company-owned retail stores. Skechers noted it was a difficult retail environment during the quarter that necessitated heavy discounting, as well as a shift in reporting on the quarter that moved the Easter sales season to the first quarter at the expense of the second.

Despite the strong rise in revenue, profits dipped over last year by 7.1%. This was caused by negative currency exchange rates, a tax bill due in Brazil, a fire in a factory in Malaysia, and slightly higher administrative expenses over last year.

Overall, it was a mixed quarter for Skechers, but the market reacted as if it was disastrous. Shares have dropped about 30% over the past two weeks as worry over slowing growth takes hold. However, the company outlined some positive developments headed into the key back-to-school season. 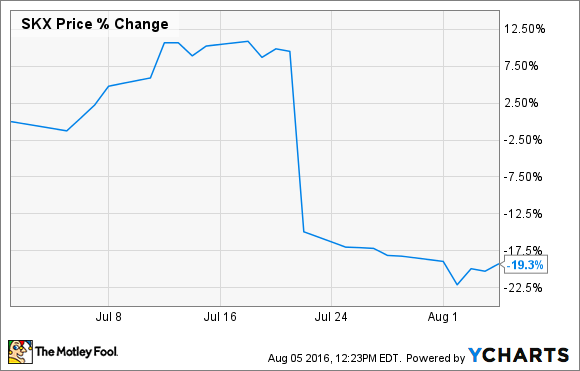 Even though the domestic business cooled off last quarter, Skechers said that sales in its kids division were heating up. The company has utilized endorsements much like other athletic-apparel companies, such as Nike (NYSE:NKE) and Under Armour (NYSE:UAA). Rather than going after big name athletes, though, the company has taken a more eclectic approach.

Through the spring months, TV commercials targeting kids and teens featured pop singers Meghan Trainor and Demi Lovato. The company also had an animated commercial campaign featuring various lines of kids' footwear. Based off of their spring success, Skechers is continuing them through the summer months leading up to the new school year.

The third quarter, which covers July through the end of September, is historically the busiest for the shoe company. Management feels this year will be no exception, with record quarterly sales predicted. The successful kids' and back-to-school marketing, combined with continued expansion overseas, is helping Skechers win with consumers.

June was a record month for shipments out of the North American distribution center, and the company reported the trend carried over into August. The European distribution center expansion was recently completed, and orders shipped out of it are also setting records this year. Despite the perceived hiccup in the last quarter, management's predictions about the current quarter are starting to coalesce. Skechers is putting together another year of sales growth.

After the recent tumble in share price, the company looks like an attractive purchase for both current and prospective owners. The consensus view from analysts is that profits will grow 22% this year, 17% next year, and an average of 20% in each of the next five.

As a result of this expected growth and the big dip in share price, the five-year PEG ratio is sitting at 0.63. The PEG ratio measures the value of a stock to its expected future growth, and anything less than 1.0 is typically viewed as a value. Considering Skechers' success in winning overseas business and its quirky business niche, shares look like a bargain to me.

With the busy back-to-school shopping season quickly approaching, I think investors will soon forget the last reported quarter and the ugly dip the stock took. Now is the time to add Skechers to your watch list, or to buy the dip if you already own it.