Light and strong aluminum has a bright future, but that doesn't change the fact that supply and demand are out of whack today. That's been a serious problem for Alcoa Inc. (NYSE:AA), which has been struggling to adjust to the oversupplied market. If you haven't checked in on the company in a while, you might be surprised how Alcoa has changed since the last recession.

The first big change at Alcoa has been cost-cutting. Aluminum is a commodity, and just like most other commodities, it saw a huge spike in demand as China's growth began to accelerate. That predictably led to an increase in supply. So when China's growth began to slow, coupled with generally weak growth throughout the world after the 2007 to 2009 recession, there was too much metal and not enough demand to soak it up. Prices did exactly what you would expect and fell.

Since Alcoa can't control the price of what it sells, controlling costs was the only option for dealing with the situation, but laying off a few employees wasn't going to be enough. Since 2008, the company has closed, curtailed, or divested 36% of its refining and 43% of its smelting capacity. Those are huge moves meant to reign in costs and trim industry supply. 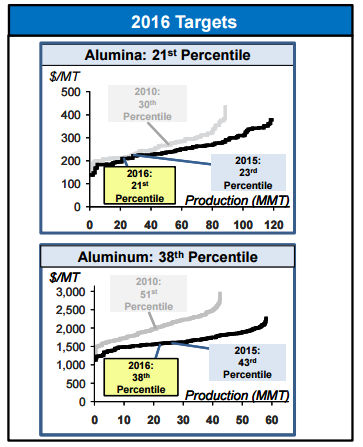 The success of these shifts becomes clear when you compare Alcoa to the broader industry in which it competes. For example, Alcoa has gone from the 31st percentile on the alumina cost curve to the 23rd. And it's moved from the 58th percentile in aluminum to the 43rd. These are huge shifts that better position the company to compete in the difficult markets it faces. But the company isn't done yet; its goal this year is to get to the 21st percentile in alumina and the 38th in aluminum.

Cutting costs isn't the only shift that's taken place at Alcoa. The company has also been working hard to reposition its portfolio, focusing on non-commodity businesses. For example, in the aluminum making business, value-added products have gone from 51% of the mix to 67% -- cost-cutting has been accompanied by other changes.

That's just the aluminum side of things. Alcoa has also been working hard to build up its parts business. In just the last couple of years, the company has really sped things up, adding aerospace parts makers like Firth Rixon, TITAL, and RTI International to the portfolio. In fact, unlike the commodity aluminum side of the business, which has been shrinking, the specialty parts business has been growing. EBITDA for this group went from $1.2 billion in 2008 to $2 billion in 2015 because of acquisitions and organic growth.

These value-added business have another key benefit: robust margins. The changes the company has made on the parts side of the business have improved this segment's margins from 8% in 2008 to 15% last year; they have also set the stage for a very different future.

The biggest change is yet to come

Indeed, all of this work has culminated in a plan to split Alcoa into two different companies later this year. One is to retain the Alcoa name and the legacy aluminum business. The other will be called Arconic and will take the specialty parts business the company has been building up. It's a complicated change.

For example, Aloca will be a key supplier to Arconic. That means the two companies will have to enter into mutually beneficial supply agreements -- one-sided deals won't fly. And think about all of the accounting and technology systems the two companies share. It needs to break that up so each company can fly solo.

It's getting close to the end of this process, which was formally announced in the fourth quarter of 2015, but it was probably in the works for longer than that. Once the split is done, Alcoa won't even be Alcoa anymore! It's going to be Alcoa the aluminum company, and Arconic the specialty parts company.

With the combined entity trading for less than sales, though, you might want to step in and take a look at Alcoa before it breaks in two. There could be more value here than some investors think because of all the changes that have taken place, and the one that's yet to come.

If you haven't taken a look at Alcoa in a while, you'll probably be amazed at how it's changed.