What: Cree (NASDAQ:CREE) shares rose 17% in July 2016, according to data from S&P Global Market Intelligence. Near the middle of the month, the LED lighting expert sold the Wolfspeed Power and RF unit to German semiconductor giant Infineon Technologies (OTC:IFNNY) for a cool $850 million. Cree shares jumped more than 12% higher on the news, and never looked back.

So what: The Wolfspeed business generated $173 million in pro forma revenue over the last four quarters, which works out to about 11% of Cree's total revenue. It is a highly profitable division today, sporting the highest gross margins among Cree's three reportable segments. But it is also the company's smallest sales generator. Moreover, these power controllers and radio chips are a poor fit with Cree's lighting-focused business strategy.

Once Infineon takes the reins for Wolfspeed, which is expected to happen by the end of this calendar year, Cree will be a pure play on next-generation lighting technologies. After whittling away taxes and other deal closing costs, Cree should pocket roughly $585 million. 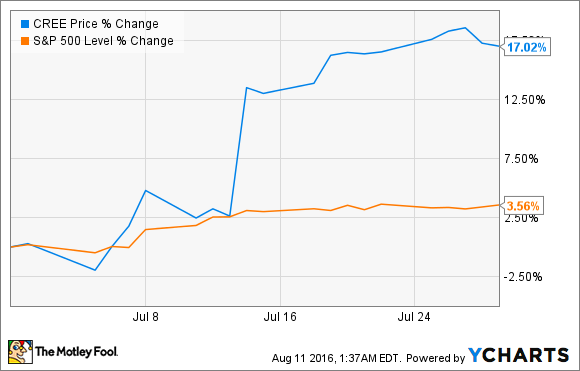 Now what: The deal will reduce Cree's earnings at first, but cash flows should increase right off the bat. The net $585 million in fresh capital and growing cash flows will be used to fund share buybacks and handpicked acquisitions in the lighting space.

Next up, Cree is set to report full fourth-quarter results on Aug. 16. The Wolfspeed announcement included preliminary takes on the quarter's revenues, pointing to sales at the upper end of management's fourth-quarter guidance. LED components led the way with higher-than-expected sales, while Wolfspeed and lighting fixtures performed largely as expected.