IBM (NYSE:IBM) is facing considerable challenges, and it will take both time and money for the company to adapt to emerging trends in the industry. On the other hand, when considering aspects such as growth opportunities in strategic imperatives, attractive valuation levels, and big cash distributions via dividends and buybacks, IBM stock looks like a compelling purchase for investors right now.

1. Betting on the right businesses

IBM is a company in transition. Management is reducing its presence in businesses related to hardware and other areas with inferior potential for growth, which is having a negative impact on revenue. In addition, foreign currencies depreciation is hurting sales figures as expressed in U.S. dollars.

In this context, IBM reported a 2.6% decline in revenue during the second quarter of 2016, to $20.2 billion. The business is still producing tons of cash; free cash flow amounted to $2.1 billion last quarter and to $13.1 billion in the trailing-12-month period, so financial soundness is unquestionable. Nevertheless, the fact that revenue is moving in the wrong direction is an important reason for concern.

However, the company's prospects seem much better when looking under the surface. IBM is aggressively investing for growth in a group of businesses management has identified as strategic imperatives, this includes cloud, analytics, security, social, and mobile technologies.

Revenue from strategic imperatives grew 12% in the second quarter, reaching $8.3 billion. The cloud segment looks particularly promising, as revenue in this division increased 30% and reached $3.4 billion during the period. The annual run rate for cloud-as-a-service revenue stands at $6.7 billion, jumping 50% year over year last quarter.

Over the last year, IBM produced $31 billion in sales from strategic imperatives, and the segment now represents 38% of total company-level revenue. The way things are going, chances are strategic imperatives will continue outgrowing other segments in the coming years, so the division will most probably account for an increasing share of overall revenue in the future. This should be an important driver for IBM in terms of overall growth going forward.

IBM stock is doing really well lately, shares of Big Blue have gained over 20% year to date, so short-term momentum is clearly to the upside. But things look remarkably different on a longer time frame, as IBM stock is still trading below price levels from five years ago.

The following table compares several valuation metrics for IBM versus other big tech companies such as Microsoft (NASDAQ:MSFT), Cisco (NASDAQ:CSCO), and Intel (NASDAQ:INTC). The four companies operate in different industries, so the comparison is not completely straightforward. Nevertheless, we are still talking about big and mature tech corporations with below-average growth that are paying consistent dividends.

Looking at ratios such as price to earnings, price to free cash flow, price to sales, and dividend yield, IBM is cheaper than Microsoft, Cisco, and Intel across the board.

Not only is IBM stock paying a higher dividend yield than other tech players facing similar difficulties, the company also has a pristine trajectory of dividend payments over the years. IBM has paid uninterrupted dividends in every year since 1916, proving the business is strong enough to produce consistent cash flows under all kinds of circumstances. Even better, IBM has increased dividend payments in the last 21 consecutive years.

In addition to dividends, IBM has a long-standing policy of allocating free cash flow to share buybacks. This allows IBM to increase earnings per share at a faster rate than overall earnings growth by reducing the amount of shares outstanding, and the company has shrunk its share count by over 36% in the last decade. 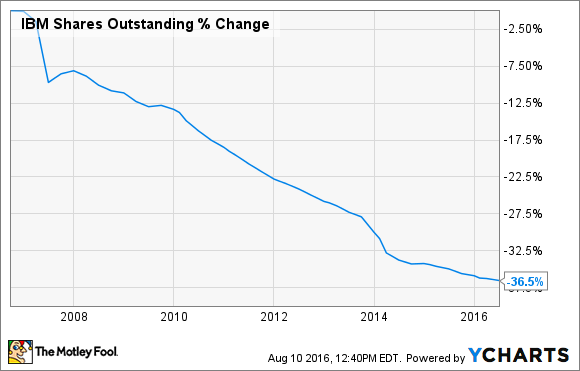 If IBM can jump-start sales growth via improving performance from strategic imperatives, then the stock offers substantial room for gains from currently attractive valuation levels. In the meantime, the company is rewarding shareholders for their patience with generous dividends and stock buybacks.