News broke on Aug. 7 that the largest mattress retailer in the U.S., Mattress Firm (NASDAQ: MFRM), would be acquired by South Africa-based Steinhoff International Holdings. What does the proposed deal mean for Mattress Firm investors?

Steinhoff's offer is $64 for each share of Mattress Firm, representing a generous 115% premium over the closing price of $29.74 on the Friday before the deal announcement. (The stock has since risen to just under that offered buyout price.) Most investors are no doubt pleased with the offer, with perhaps the exception of those who bought during the winter of 2014-15. Mattress firm went public in 2011 and you can see from the chart below the short period when it's traded above $64 a share. 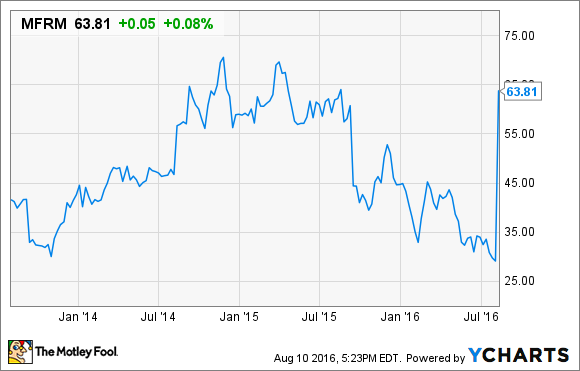 Mattress Firm has been growing over the years through acquisitions, most recently scooping up Sleepy's and Sleep Train. Those buyouts helped the company become by far the nation's largest mattress retailer, with more than 3,500 stores across 48 states, but sales and profits have suffered as of late because of both smaller players that are fighting back with heavy discounting and the company's own heavy debt burden.

Revenue during the company's first quarter increased 49% year-over-year, mostly due to the 1,065 stores acquired in the last 12 months. However, comparable-store sales decreased 6.1% during the period, and mattresses priced under $500 accounted for a higher percentage of sales than last year. Sales of mattresses priced over $1,000 dropped 1.1% over the last year. Capping off the fall in sales, long-term debt increased 115% which helped contribute to an extra $13 million in interest expense in the last quarter alone.

All of those issues would be assumed by global mattress and furniture discounter Steinhoff. The offer of $64 a share is an all-cash tender, so investors who agree to the deal can walk away from the company. The boards of directors for both companies have approved the buyout, so the deal is pending regulatory review and a simple majority of Mattress Firm shareholders need to agree to the offer.

If the deal goes through -- which the companies expect to happen in the next couple of months -- Mattress Firm will continue operating as a subsidiary of Steinhoff from its current headquarters in Houston. What does Steinhoff get in the deal? The company further diversifies its geographical presence, adding North America to its already sizable household-goods retail outfit in Africa and Europe. The company operates 40 brands in 30 different countries.

It might be a good time to sell your Mattress Firm shares if you're sitting on a profit after the triple-digit overnight gains. Two reasons you might continue holding the stock is to take part in the tender offer with Steinhoff or to see if a higher offer comes in from another party. However, the Steinhoff tender offer price of $64 in cash per share is just $0.16 more than where the stock closed on Thursday and a competing offer doesn't look likely.

It's not uncommon for speculation to swirl about a higher offer price when an acquisition is announced. It is important to bear in mind, though, that that is just speculation. Mattress Firm already holds industry leadership in the U.S., so it's unlikely for potential suitors to come beckoning.

Owners of Mattress Firm stock who want to wait until the offer from Steinhoff should accept it when it's received. Rejecting the offer for your shares would put you in a difficult position if the deal goes through as finding a buyer for your position after the tender offer would become increasingly difficult and probably only happen for less than $64 per share.

If you do sell your Mattress Firm shares or accept Steinhoff's offer, you'll probably be looking for somewhere to reinvest your cash. If you want to stick around with Steinhoff, that may not be an option. The company's shares trade primarily on the Frankfurt and Johannesburg stock exchanges, so your access to them could be limited.