If there's anything Anheuser-Busch InBev's (NYSE:BUD) second-quarter earnings report showed, it's just how important the merger with SABMiller (NASDAQOTH: SBMRY) is to it. It needs access to its rival's high growth markets if it wants to have any chance of being able to grow sales and profits, but now that it's secured virtually all of the regulatory approvals it needs to complete the transaction, it somehow has to placate Miller's recalcitrant shareholders, who are none too pleased with the price A-B is paying for their shares.

Anheuser-Busch said revenue fell 2.2% to $10.81 billion as beer volume fell 1.7%, but on an organic basis, without the impact of currency fluctuations, the brewer's revenue climbed 4% as it pushed premium products like Michelob Ultra, which typically sells for 20% above Bud Light.

Yet other than Mexico, where volumes rose 10% from the year-ago six-month period, A-B InBev continues to to see volumes fall. While U.S. volumes were flat, they were down in its northern Latin American markets by 5% and tumbled 14% in the south. It suffered half-percent declines in both the Europe and Asia-Pacific markets. 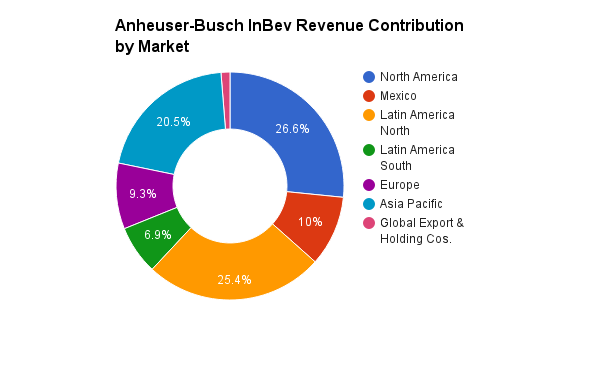 North America and Latin America North remain A-B InBev's two most important markets, but the continued migration of U.S. consumers to craft beer and imports hurts it in the one while the economic upheavals in Brazil take it down in the other. The Miller deal is crucial to the brewer's future for the following three reasons.

1. Acquiring Miller won't do anything for its U.S. business. To pass regulatory muster with the Justice Dept., A-B agreed to sell Miller's interest in MillerCoors, the joint venture project with Molson Coors (NYSE:TAP). Any growth realized will redound to Molson, not Anheuser-Busch. Similarly, because it previously wanted to acquire Mexico's Modelo, it had to give up to Constellation Brands' (NYSE:STZ) distribution rights of Corona, so it loses out on import's growth, too.

According to the analysts at market research firm IRI, import beer grew 6.7% in the first two quarters of the year, surpassing the 6% increase achieved by craft brews. While that's down slightly from the 8.7% jump imports saw in the same period a year ago, it puts the category firmly ahead of craft beer. Constellation's earnings grew 15% in the first quarter, driven almost wholly by its portfolio of Grupo Modelo beers, primarily Corona.

2. Miller's strength in Latin America is in the south. SABMiller has near monopoly status in certain South American countries such as Colombia, Ecuador, Panama, and Peru, and the acquisition gives AB InBev access to those fast-growing markets, which account for 34% of Miller's total earnings before interest, taxes, and amortization of intangible assets. Since 2010, Latin America's EBITA has grown at a compounded rate of 7.5% annually for Miller.

3. The real opportunity is Africa. The continent is Miller's second most important market, contributing another 30% of EBITA to its ledger, and forming the strongest region for the brewer last year, driven by Nigeria and South Africa.

According to industry website Beverage Daily, Africa is the fastest-growing market for beer, and it's estimated that it will grow faster than any other region over the next five years. Miller, of course, having begun as South African Breweries, has a natural advantage there, where it possess a third of the market share. Miller, Heineken, Diageo, and Castel Group (in which Miller owns a stake) reportedly have dominant positions there as well.

Analysts at market researcher Canadean forecast growth will continue at a 5% annual rate through 2020, which CEO Carlos Brito admits is a driving force of the merger with Miller, telling analysts last year, "Africa in particular will be a critical driver of future growth for the combined company."

Anheuser-Busch InBev is suffering from changing consumer tastes here at home and macroeconomic events around the world. It had to raise its takeover offer for SABMiller because of the U.K.'s decision to exit the European Union, but it wasn't enough to mollify critics that the buyout price is now too low and large shareholders Altria and BevCo are getting special treatment.

Still, its earnings report indicates that if Anheuser-Busch InBev wants any hope of growth in the future, it needs to acquire Miller. That might not be as easy a task as it was once thought.