I've written many times about Realty Income Corporation (NYSE:O) as an excellent long-term investment, and actually own the stock in my personal retirement account. However, when investing in a stock, it's important to know that there's always some level of risk -- especially on a short-term basis. With that in mind, here are three things that could potentially make Realty Income's stock go down.

Low interest rates are typically good for REITs, and the current persistent low-interest environment is a big reason Realty Income is up 45% over the past year. 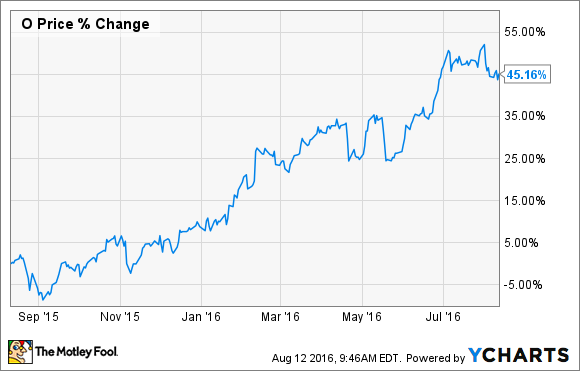 It's important to keep in mind that this can work both ways. Rising interest rates make it more expensive to borrow money, and while I wouldn't call Realty Income's debt reliance high, a higher cost of borrowing would likely translate to lower profit margins for the company.

In addition, rising rates can create selling pressure on high dividend stocks like REITs, as they make less-volatile investments like bonds seem more appealing. Think of it this way: While the 10-Year Treasury yield is at 1.5%, Realty Income's 3.5% dividend yield may seem worth the extra risk you take. However, if your main investment priority is income, would this still be the case if Treasuries were yielding say, 5%?

The acquisition market could dry up

Realty Income grows by acquiring net-lease properties, and the market for such properties is pretty strong right now. In fact, the company said in its second-quarter earnings report that the acquisitions completed during the first half of 2016 were at record-high investment spreads relative to the cost of capital, and that there continues to be an "ample pipeline" of acquisition opportunities.

There are several reasons this could change. Higher interest rates would likely mean higher cost of capital, and therefore fewer attractive opportunities. Additionally, real estate prices as a whole could rise to the point where it's not as profitable to acquire new properties, or there could simply be a lack of high-quality properties coming onto the market. Whatever the reason, a decrease in the company's acquisition rate could cause investors to get nervous, and could make the stock fall.

A major tenant could go bankrupt

There are many retailers struggling to remain profitable right now. Macy's (NYSE: M) and several other major retailers recently announced store closings. And, some well-known retailers, such as Aeropostale, have even filed for bankruptcy lately. If one of Realty Income's major tenants were to do the same, it could take a bite out of the company's income and cause the stock to fall.

However, it's important to point out that Realty Income doesn't have either of these retailers, or many like them, as tenants. Rather, Realty Income's portfolio is specifically designed to be full of retailers that don't have to worry about competition from online retailers or about profits drying up in a recession. Consider this list of Realty Income's largest retail tenants:

The bottom line is that although there is a lower risk of a major tenant going bankrupt than with retail in general, it's still a legitimate risk.

Will any of these things happen?

Sure. Interest rates will rise eventually, it's just a matter of when and how fast. Some level of interest rate growth is already priced into Realty Income's stock, but rapid growth in interest rates could certainly happen if inflation spikes or economic data shows faster-than-expected improvement. So, I'd view an interest rate spike as the most likely of the three.

And, while any of the three are certainly possible, long-term investors shouldn't worry too much about them. After all, if Realty Income's stock experiences any weakness caused by any of these three reasons, it would be a welcome buying opportunity, not a reason to panic.