Bill Ackman's Pershing Square Capital Management has seen better days. The publicly traded version of the company's hedge fund, Pershing Square Holdings, was down by 21.1% net of fees as of the end of the second quarter.

Though that fund doesn't release its holdings, Pershing's hedge is required to file quarterly 13F forms that document the fund's holdings at the end of every quarter. Its newest 13F reveals that Pershing Square has been dumping its stakes in Canadian Pacific Railway (NYSE:CP) and animal-health business Zoetis (NYSE:ZTS), and further reduced its holdings after quarter's end.

Pershing's sales of Canadian Pacific were telegraphed to the market ahead of the company's required 13F filings. On April 22, Pershing Square filed an amended 13D disclosing that the company and its funds held 9.84 million shares, down from 13.94 million at the end of the first quarter. 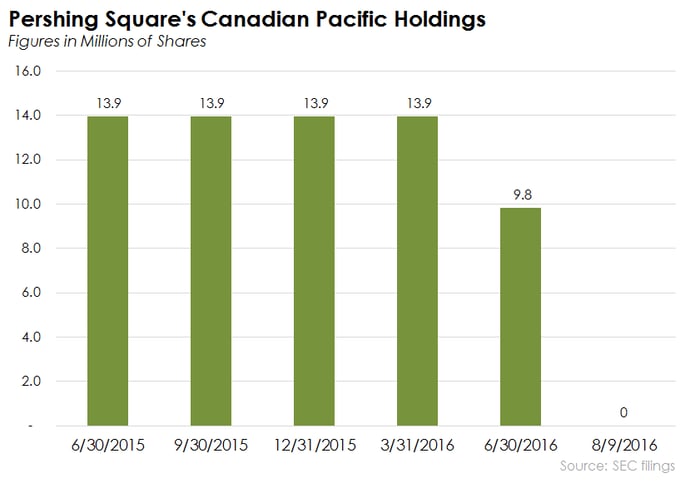 On Aug. 9, Canadian Pacific filed an 8-K with the SEC announcing the completion of another transaction, stating that Pershing divested "all of the common shares" it held.

Ackman's sales were curiously timed, coming less than four months after Norfolk Southern, which Canadian Pacific wanted to acquire, rebuffed it for the final time. The activist investor was front and center in the deal as a Canadian Pacific board member and one of its largest investors.

Ackman even went so far to make the case for the merger on conference calls and in a December 2015 presentation in which Pershing Square slides followed a slideshow by Canadian Pacific. With any prospect of an acquisition seemingly dead in the water, it seems Ackman believed that it was time to finally close the book on what stands as one of his most successful activist campaigns in the firm's history.

Where Canadian Pacific was one of Ackman's biggest wins, Zoetis was the subject of an activist campaign that never really went anywhere. After suggesting that cost cuts could bolster the company's profits, the fund ultimately won just two Pershing-friendly seats on the Zoetis board. 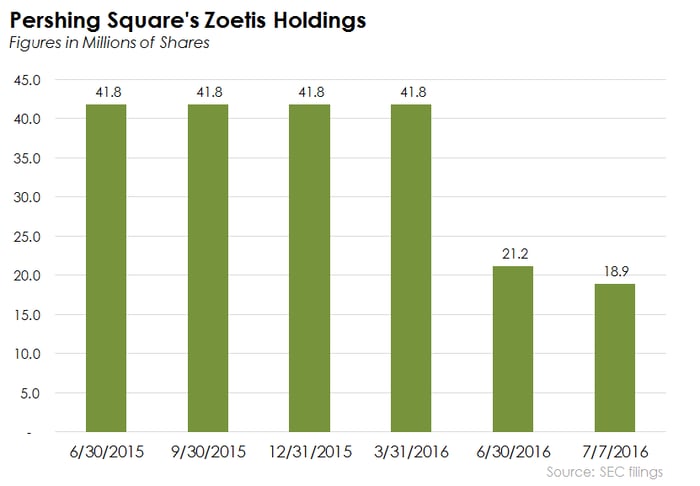 Having held on for nearly two years, Pershing is folding its hand. In April, a Pershing executive noted that the company would not ask Zoetis to reappoint one of its chosen board members, William Doyle, for re-election to the company's board.

The fund was rumored to have been selling shares in that same month, when an investment bank offered a large block trade. That rumor proved to be true. Ackman slashed Pershing's stake in the company by roughly 50% in the second quarter, and in the seven days between June 30 and July 7, the company further reduced its stake. Pershing Square's now holds 55% fewer shares than it did at the end of the first quarter.

How Pershing Square chooses to deploy its new dry powder remains to be seen. Because of outsize losses on the fund's stake in controversial pharmaceutical company Valeant, Pershing Square's LPs have reportedly pulled more than $600 million in assets from the company. These redemptions pale in comparison with its stakes in Canadian Pacific and Zoetis, which were valued at more than $3.7 billion at the end of the first quarter. Thus, it seems likely that we could see Pershing Square do some buying rather than selling when its third-quarter 13F is filed later this year.