Investors have historically been attracted to fertilizer stocks because of their growth potential and high dividend yields. Those positive qualities became a little less attractive when agricultural nutrient prices collapsed in late 2014, but not all companies shared the pain equally. Agrium (NYSE: AGU), which sells each of the three major nutrients -- nitrogen, phosphate, and potassium -- in addition to pesticides and seeds, actually managed to increase its dividend payouts until earlier this year.

The next dividend payout in October will be the lowest since September 2014, but if fertilizer prices rise in the second half of the year as many industry insiders expect, then the payouts could resume their upward trajectory within a few quarters. Given that and the recent optimism building for the industry, here are three reasons Agrium's stock could rise.

Agrium has weathered current market conditions considerably better than its peers for one simple reason: diversification. While PotashCorp and The Mosaic Company have lost 50% and 40%, respectively, since the beginning of 2014, Agrium has managed to break even. Relative to its own industry, that's pretty spectacular. 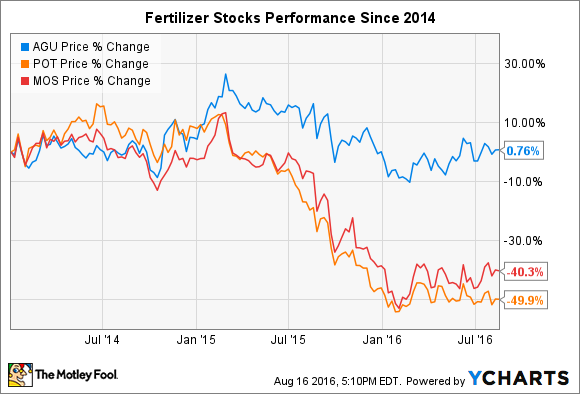 How has Agrium averted a collapse in share price in the face of multi-year low prices of all three major agricultural nutrients? The company realizes significant contributions to both its top and bottom lines from its retail business, which sells seeds, pesticides, and various services to farmers. Seed prices have been slammed in recent years, too, which does negatively affect Agrium, but even that can't undo the segment's strength. In fact, the retail business has generated 80% of total gross profits for Agrium through the first half of 2016. Continuing to navigate the difficult headwinds presented by fertilizer markets won't be easy and could take a few more quarters (still), but investors should find comfort knowing the company can generate profits elsewhere.

Major agricultural regions in the United States are encountering significantly wetter weather than usual. While this can be more of an annoyance most years and do nothing more than delay harvests; too much rainfall can stress crops, create favorable conditions for pests to thrive, and delay herbicide applications. In 2009, Arkansas lost crops worth an estimated $397 million to wet weather -- and farmers in the state are seeing the same series of events begin to unfold. However, unusually high amounts of rainfall and humidity could be a boon for business for Agrium, which sees its retail business benefiting from its ability to help farmers apply fungicides and herbicides to protect yields.

Agrium, as with other major fertilizer companies, has told investors that it sees signs of a turnaround in fertilizer prices in the second half of 2016 with most of the progress to be witnessed in the fourth quarter. Stronger international demand plays a role, as do harvest conditions for North American farmers.

A strong 2016 harvest for both corn and soybean -- the U.S. Department of Agriculture expects each to be a record -- is expected to greatly reduce nutrient levels in soils. That should support the above average application of fertilizers this fall, and thus, help support stronger demand and increasing prices for agricultural nutrients in the second half of 2016.

It's worth noting that investors heard similar opinions after the record harvests of 2015, but stronger demand for agricultural nutrients failed to materialize. Everything from crop rotations to lower prices for grains can affect the volume of fertilizer bought and applied by farmers. Simply put, a range of complex factors are at play, which means that investors can be optimistic, but will have to wait for more concrete evidence later this year.

As you can see, there are several reasons Agrium's stock could rise. While two of three presented above aren't dependent on a recovery in fertilizer prices, it remains the biggest potential mover for the company in the near and medium term. If management is correct, that could happen within the next several quarters, which could be reason enough to put Agrium on your watchlist.