For a little more than two years now, shares of Sunoco LP (NYSE:SUN) have taken it on the chin. There are some factors that are out of the company's control, like Wall Street's aversion to companies in the energy industry and master limited partnerships. The company hasn't done the market many favors, either, as it has been aggressively growing and taking on debt in the process.

Restoring investor confidence with a better-looking balance sheet would certainly go a long way toward improving the Sunoco's stock price, but it isn't the only thing it can do. Here are three ways the company's stock price could rise in the coming years.

Get its balance sheet back under control

These drop-downs have significantly increased EBITDA and given the company some pretty attractive economics of scale. The downside is that the company has taken on quite a bit of leverage to make it happen. Today, the company's net debt to TTM EBITDA stands at an alarmingly high 7.1 times. Granted, once we get a full year of results after all of those acquisitions are in place, that number should decline, but it's still running at a rate in the 5.0 times to 5.5 times range, according to credit ratings agencies. Making matters even more concerning is that the company didn't generate enough cash flow in the prior quarter to meet its distribution needs. The company's distribution coverage ratio -- distributable cash flow divided by total cash paid in distributions -- was 0.93 times. That simply cannot continue to happen.

These kind of metrics are ones that will make an investor in master limited partnerships get really nervous, and that's probably part of the reason the company's stock now has a distribution yield of 10.7%. Basically, the market is pricing in a lot of pessimism.

Sunoco could make efforts to settle investor concerns by tapping the breaks for a little when it comes to growth and instead focus on lowering its debt load and putting its payout to shareholders on more sound financial footing. If the company were to lower its debt levels to a point where it can receive an investment-grade credit rating, that would go a long way toward restoring creditor and investor confidence, and it would really send the company's stock soaring.

Compared to other parts of the oil and gas value chain, selling gasoline and diesel at the retail level is one of the more stable revenue-generating methods. Even when crude oil prices and refining margins fluctuate wildly, retail and wholesale fuel sales margins remain pretty consistent. The only thing more consistent for companies like Sunoco than fuel margins is merchandise sales. Over the past 12 years in the retail fuel business, merchandise sales have increased like clockwork, with modest same-store sales growth coupled with modest additions to total stores. 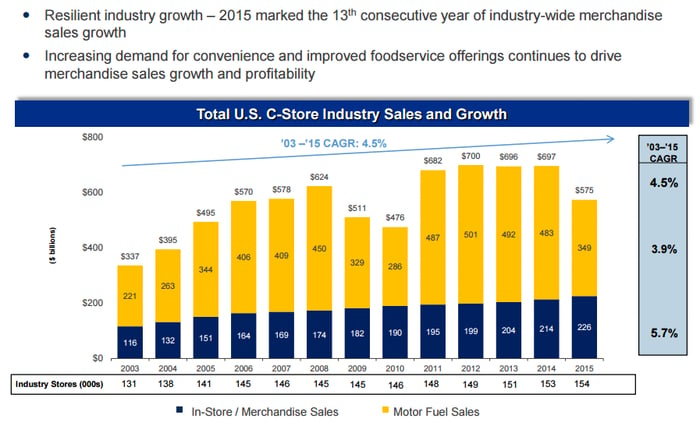 Merchandise sales are a lucrative business for retailers. In Sunoco's most recent earnings release, it reported a gross margin on merchandise of 33%. By offering better foodservice options and a better in-store experience, the company expects those margins to increase even more.

By deriving more and more sales from merchandise, Sunoco should be able to generate more consistent cash flows. That's a great thing to have since the business is structured as a master limited partnership that pays out a sizable distribution each quarter.

There are some places where organic growth is possible for the retail fuel business, but for the most part, it's a pretty mature market. That means there's only so much growth that can be attained with new store construction before running into diminishing returns. Luckily for Sunoco, the market for retail stores is very fragmented and ripe for consolidation. More than 70% of the nations' retail fuel stations are operated by businesses that own less than 50 stores. 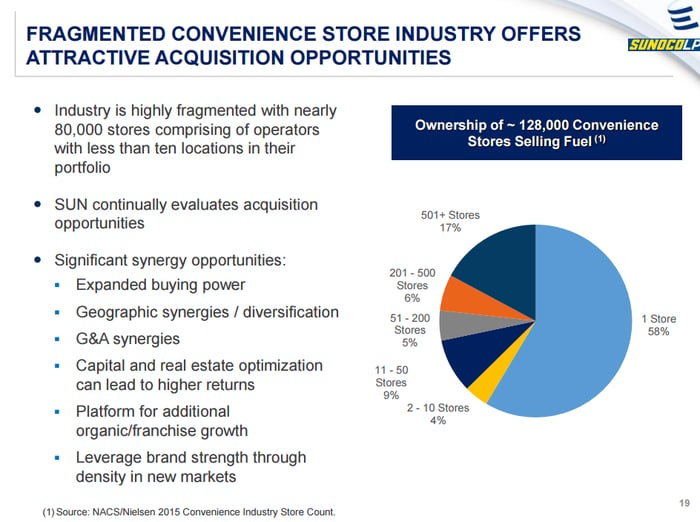 Acquiring small mom-and-pop retail fueling stations is a huge opportunity for Sunoco to leverage both its size as one of the largest fuel retailers in the business, and also its retail brand power to drive higher merchandise sales and margins.

The trick to this kind of growth is to not overpay for acquisitions, otherwise rates of return will be impacted. That being said, there is an immense opportunity for Sunoco in consolidating the retail fuel market, and capturing that opportunity could really drive bottom-line results.

There's certainly lots of room for Sunoco to grow its business despite the rather mature market in which it operates. Before investors will be willing to jump on any opportunity, though, Sunoco will probably need to clean up its financials and restore investor confidence. This is by far the most important near-term catalyst for this company's stock, and if it can couple that with some modest growth, then we could really see shares of Sunoco rise.