Calumet Specialty Products Partners (NASDAQ:CLMT) is a bit of an enigma. On the surface, its business of making non-fuel products from crude oil looks like a unique opportunity that should be a profitable venture, but the company has been plagued with poor performance. Deep down, those problems come from several years of management missteps that have, financially speaking, painted Calumet into a corner.

To better understand why Calumet's business model makes sense but hasn't quite worked out, here are four charts that explain what you need to know.

The first things that come to mind when you think of refined petroleum products are gasoline and diesel. These two products, in fact, make up about 80%-90% of the output of a typical refinery, but there are hundreds of other petroleum-based products such as lubricants, solvents, and waxes. These products typically have higher margins and there is much less price volatility because they are more niche than fuels. As the chart below shows, the average gross profit margin for a barrel of oil refined exclusively into specialty products has remained pretty consistently in the range of $45-$55 per barrel over the past two years while crude oil prices have changed dramatically and the gross profit margins for fuels have fluctuated wildly over that time. 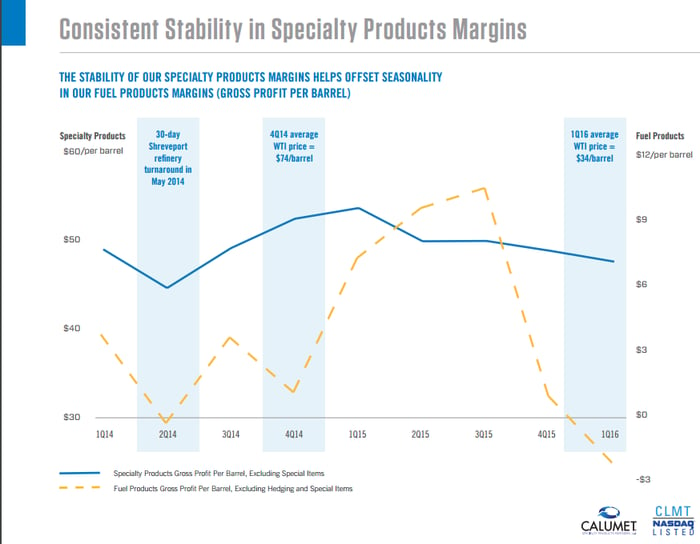 A barrel of crude oil is a mixture of molecules that, when separated, generate certain percentages of product types. Refineries can then add certain physical and chemical treatment processes to alter the percentages of desired products. Traditional refiners target what they call a clean yield -- the percentage of total refined products that are gasoline and diesel -- in the mid-to-high 80s. Calumet, on the other hand, shoots to generate about 60% fuel products and the rest goes toward those specialty products.

A stable business in hiding

As those gross profit-per-barrel margins above suggest, there is a decently profitable opportunity manufacturing specialty petroleum-based products. Unfortunately, the refining processes are going to still generate the traditional products. Over the past several quarters, Calumet's specialty product business segment has generated rather consistent amounts of EBITDA, but its fuels and oil-field services business have swung wildly up and down. 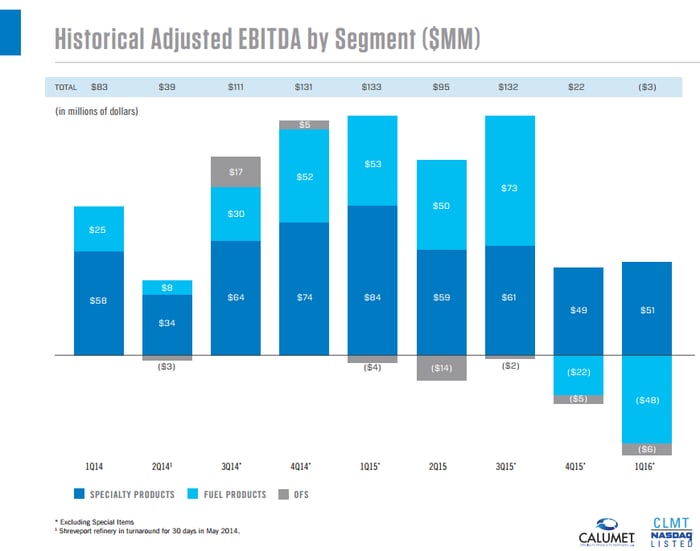 It should be noted that the first three quarters of 2015 were one of the best markets to be a refiner in decades. Refined product prices tend to lag behind crude oil prices. So, when crude prices declined rapidly from $90 a barrel in late 2014 to less than $30 a barrel by the end of 2015, refined product prices remained several months behind and created huge refining margins. For Calumet, those were three great quarters, but it masked the fact that there were underlying issues in the business.

Spending money in the wrong places = a suffering balance sheet

To a certain degree, the company is going to generate products like gasoline and diesel from the refining process -- that's just the name of the game. Instead of trying to minimize its exposure to these products, though, it made some very questionable moves that greatly increased its exposure to fuels. Between 2011 and 2013, it acquired three smaller refineries across the U.S. that exclusively manufactured traditional refined products and invested in the construction of a new refinery that would exclusively produce diesel.

Trouble is, these refineries are smaller operations that don't benefit from the same economies of scale that other, more traditional refiners have. When refining margins are as extraordinarily high as they were in 2015, this can mask these inefficient operations. However, when margins decline to levels where traditional refiners are generating modest profits, Calumet's fuels segment is going to suffer.

To make these matters even worse, that shopping spree from 2011 to 2013 was mostly done with debt. This has left the company with an extremely onerous balance sheet.

Today, quarterly interest expenses are 44% of gross profits. So, even if the company were able to generate steady operational profits from the business, almost all of it goes to servicing its debt. The situation continues to get worse, too. Since it can't afford to pay down any of its debts, it has been forced to refinance at ever increasing interest rates. Calumet's most recent debt issuance came with a whopping 11.5% coupon rate.

All at the expense of shareholders

The combination of questionable moves by management over the past five years and taking on debt to finance them have left Calumet in a tough spot both financially and operationally. These issues have all coalesced in recent months to the point that it has been forced to suspend its distribution to shareholders. Just when operational results started to turn south at the end of 2015 as refining margins started to tighten, Calumet stock has sunk like a stone. 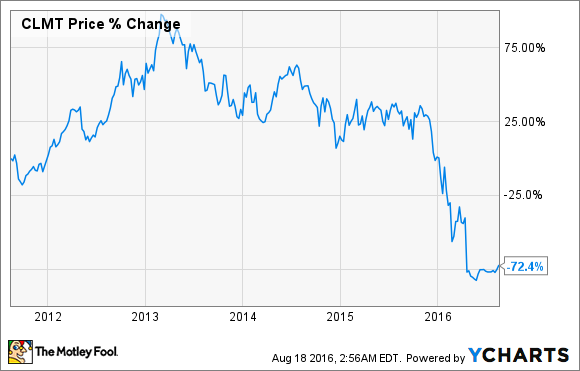 Calumet CEO Timothy Go was brought on at the beginning of 2016 to repair much of the damage that had been done by his predecessors. He has primarily slashed capital spending significantly to conserve cash and focused on smaller, quick-hit investments to its existing facilities that should increase operational efficiency and increase margins. At this point, every little bit helps, but it's pretty clear that some drastic measures will need to take place if the company wants to pull itself out of this funk.

Until it cleans up its balance sheet and shows that it can operate its fuel-oriented refineries efficiently -- or divest those facilities to focus on specialty products -- it's hard to find a reason for long-term investors to be interested in this company.