For years, Magellan Midstream Partners (NYSE:MMP) has been a rock solid investment that has churned out dividends at an ever growing rate to investors and has run circles around the S&P 500 over the past decade on a total return basis. It has done so with a business model that ensures consistent operational cash flows and a disciplined management team that has balanced growth, financial health, and payouts to investors very well.

As stable as Magellan's business may seem, it isn't immune from risk by any means. Here are three threats that, while not the most immediate threat to the company's stock price today, have the greatest chance of significantly impacting the stocks long term performance.

Anyone that has any investment in a company that deals with oil and gas needs to remember one thing. At any given moment in time, there is a chance of a major accident or spill that has the potential to wreak havoc on the financials on the business long term. Anyone that needs a reminder just needs to look at the financial statements of BP. It's been more than 6 years since the Macondo well spill and the company is still shelling out several billion dollars a year for cleanup and litigation costs.

The chances of a spill for Magellan may be low, but the company is not immune to the risk. In fact, the company announced this past quarter that there was a minor incident with one of its pipes thanks to flooding. Unfortunately for investors, there are few if any ways of foreseeing such an incident.

One mistake that some investors can make when evaluating master limited partnerships is assuming that all new projects are a good thing for the company's bottom line. Problem is, a project that simply increases cash flow doesn't mean it was a great investment. These companies need to generate decent rates of return to make a project worth while. Magellan has been one of the better companies at investing in higher rate of return projects. Typically, the company looks for investments with a cost that is 8 times the annual EBITDA that project will generate or less.

Continuing to find new projects with high rates of returns can be challenging in and of itself, but consider this: For the past several years, Magellan has benefited from the low interest rate environment that allows for lower rate of return projects to be profitable. If, over the next several years, we were to see an increase in interest rates, it could lead to higher borrowing costs for Magellan and would in turn require that new projects generate even higher rates of return.

The looming threat of declining fossil fuel use

Of the threats to Magellan's business, this is the one that's furthest on the horizon, but it has the potential to be the most disruptive. Globally speaking, oil and gas demand is set to rise for many more years to come as more and more people in emerging markets and developing nations improve their standard of living. In more mature, developed markets like the US, though, total gasoline and diesel demand has been flat for more than a decade. As fuel efficiency standards increase over the next decade and electric vehicles start to gain a toe hold on the automotive market, it's expected that total refined product consumption will start to wane.

For Magellan, this would be a rather acute issue because so much of its current cash flow comes from its refined petroleum product pipeline network that operates exclusively in the US. Unlike natural gas and crude oil pipelines that have been able to reverse flows in recent years to accommodate the changes in product flow, refined product pipes won't really have that option. 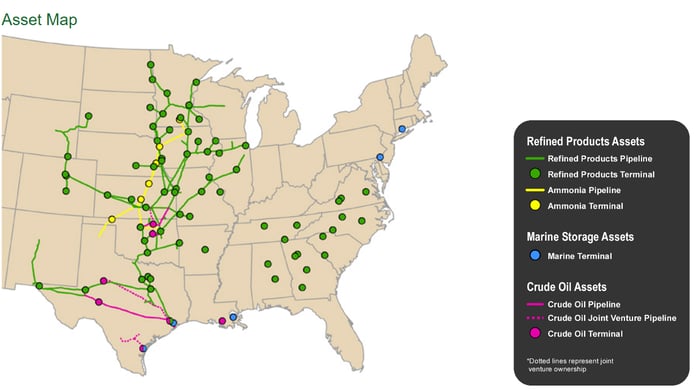 Let's put this in perspective, this is a threat that is a long, long ways away from happening. Also, many of the investments the company is making today are geared toward the Gulf Coast region that will be used for the export of crude oil and refined products from the US to those markets that will likely see greater oil demand in the future. But this is something that investors do need to keep in mind if they have decade long investing time horizons.

Taking a snapshot of Magellan's business today, the risks are rather low. It has a robust pipeline network that is hard to replicate and provides a strong geographic competitive advantage. Also, its profits come from fixed fee contracts with minimum commitments from customers to ensure a steady stream of cash on a quarterly business. So evaluating the company's stock today suggests it's a pretty low risk investment.

The longer you look into the future, though, there are some threats to watch out for. The possibility of a pipeline leak or rupture could be a costly accident; new projects not delivering as advertised could reduce rates of return, and the long term threat of declining fossil fuel use will be concerns that investors will want to evaluate over time. If any of these threats start to chip away at Magellan's foundation, then it may be time to reevaluate this stock.