J.C. Penney (OTC:JCPN.Q) stock is having a great 2016. Shares have risen by more than 60% year to date, as the department-store chain makes sound progress in its turnaround efforts. Past performance is no guarantee of future returns, but it looks as though J.C. Penney stock offers substantial room for gains going forward.

Going in the right direction

J.C. Penney has been implementing a series of smart initiatives over the past couple of years. Management is aggressively betting on private brands such as Arizona, St. John's Bay, Liz Claiborne, Xersion, and Stafford, a decision that's improving profit margins for the company.

J.C. Penney produced nearly $6 billion in sales from private brands in 2015, or approximately 47% of total revenue during the year. The company has a team of over 200 in-house designers, and the private-brands business is particularly promising in terms of profitability, since it doesn't depend on middlemen or intermediaries. Private brands also differentiate the company from the competition, a key advantage in the competitive department-store industry.

The company has significantly expanded its presence in home products lately, and this is one of its strongest categories. Products such as sheets, bath accessories, cookware, custom windows, and furniture are producing not only strong year-over-year growth in the second quarter of 2016, but also an acceleration in performance versus the first quarter of the year.

Sephora inside J.C. Penney is another strong driver. J.C Penney opened 27 new Sephora locations last quarter, bringing the total number of units to 574. Management is planning four more locations later in the fall, and according to CEO Marvin Ellison, performance "is incredibly encouraging" for both mature and new Sephora shops.

The company is placing new Sephora units in more small and rural areas than it had originally planned, and it's receiving a better-than-anticipated response from customers. For this reason, management is boosting its expansion plans for Sephora inside J.C. Penney going forward.

J.C. Penney is also aggressively investing in omnichannel technologies. The company completed the rollout of its buy-online, pick-up-in-store, or BOPIS, same-day service during the second quarter, and this capability is now available in all J.C. Penney stores. Nearly 40% of customers who visit a store to pick up a BOPIS order are also purchasing additional items, so this service is benefiting J.C Penney in multiple ways.

Management is expecting to produce comparable-store sales growth in the range of 3% to 4% during the full year 2016, while gross profit margin is forecast to expand by 10 to 30 basis points over 2015 levels. The company is aiming for $1 billion in EBITDA (earnings before interest, taxes, depreciation, and amortization) in 2016, and that figure is expected to rise to $1.2 billion next year. That would be a substantial increase from $715 million in EBITDA in 2015.

Financial performance looks even more encouraging when comparing J.C. Penney with other companies in the department-store sector, as most competitors are reporting declining revenue.

The following chart compares EBITDA margin for J.C. Penney against Macy's, Nordstrom, and Kohl's. The main point is quite clear: J.C. Penney is significantly closing the profitability gap versus the competition, but it still has considerable room for improvement. 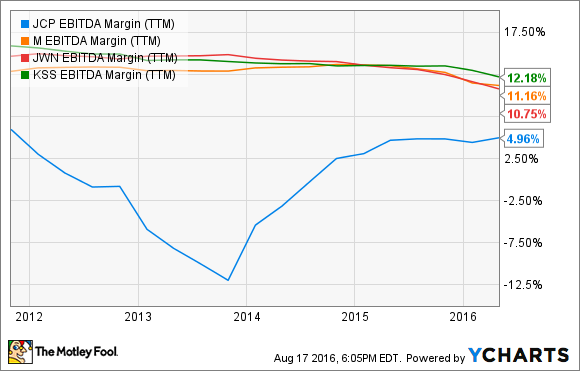 Wall Street analysts are expecting $13.24 billion in revenue from the company next year. Under this assumption, $1.2 billion in EBITDA would mean an EBITDA margin of nearly 9% of revenue. Management guidance is, therefore, ambitious, but not unreasonable at all by industry standards.

Importantly, the stock is priced at a significant discount to the competition. J.C. Penney trades at a price-to-sales ratio of 0.26, versus 0.47 for Macy's, 0.57 for Nordstrom, and 0.43 for Kohl's. If management continues leading the company in the right direction, then J.C. Penney stock still offers significant room for gains from current valuation levels.