Shortly after Model X deliveries began late last year, Tesla (NASDAQ:TSLA) management said early signs suggested the new SUV wouldn't cannibalize sales of its Model S. But with sales of the sedan declining sequentially for two quarters in a row, just as Model X deliveries increase, is cannibalization becoming a reality? Or is this pullback in Model S sales only temporary?

It's easy to see why some investors might be concerned about Model S sales. Between the fourth quarter of 2015 and the first quarter of 2016, Model S deliveries were down 28%, and they fell another 21% in Q2. Sure, second-quarter Model S deliveries were up 24% year over year, but these sequential declines are still concerning given how steep they are. 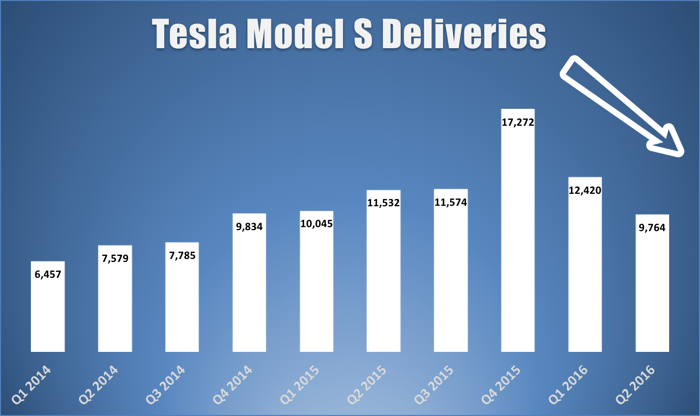 Tesla's delivery trends this year seem to suggest cannibalization is the problem. Two quarters in a row of declining Model S deliveries coincides with sharp increases in Model X deliveries during these same periods as Tesla ramps up production of the new SUV. In Q1, Tesla delivered 2,400 Model X units -- up from 206 in the fourth quarter of 2015. And this figure jumped again in Q2, with Model X deliveries reaching 4,638.

But despite these recent delivery trends, there's good reason to believe Model S deliveries are about to turn upward, even as Model X deliveries continue to increase.

Tesla management is optimistic about the trajectory for Model S deliveries in the second half of the year.

When asked about demand for Model S in Tesla's second-quarter earnings call, which took place more than a month into Q3, Tesla head of global sales and service Jon McNeill said demand for Model S was "healthy" in Q2 and "into the third quarter as well."

McNeill went on to explain some of the factors and trends behind Model S demand:

Tesla CEO Elon Musk was even more specific during the call, saying he believed the company can get to production and deliveries of around 2,000 units per week, roughly split between Model S and X, during the second half of the year. This implies about 13,000 Model S deliveries a quarter -- up meaningfully from Tesla's 9,764 Model S deliveries in Q2.

Notably, however, 13,000 quarterly Model S deliveries would still be down quite a bit from the nearly 17,300 units Tesla delivered in the fourth quarter of 2015. So, there likely is some cannibalization of Model S sales by Tesla's newer Model X. But the cannibalization may not be as severe as recent delivery trends suggest.

So, what can investors expect from Model S deliveries in Q3? Expect around 11,000 to 14,000 units, boosted by higher demand thanks to the vehicle's redesigned lower starting price.