Electric-car maker Tesla Motors' (TSLA -6.92%) quarterly deliveries during the first half of the year have been a disappointment. Sure, first-half deliveries are up significantly on a year-over-year basis, but they declined sequentially in both Q1 and Q2. In addition, Tesla has missed its own guidance for both the first and second quarter of 2016.

But Tesla's deliveries are about to turn sharply upward in Q3. While an expected increase in Model S sales will likely play a role driving deliveries higher, most of the quarter's growth will likely come from a continued rapid production ramp of Tesla's new Model X. 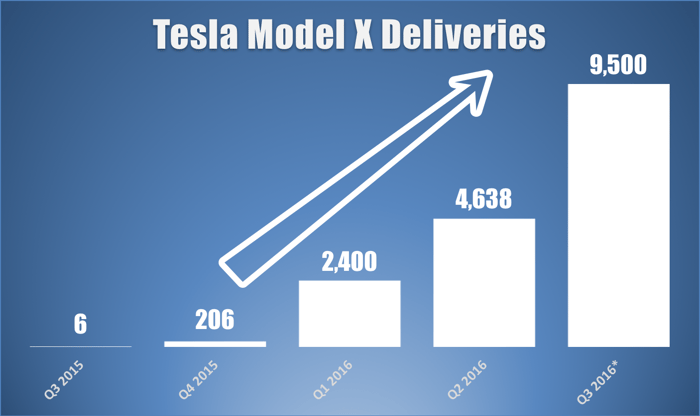 Here's how I arrived at this figure.

The best way to forecast how many Model X units Tesla could deliver during Q3 is to look back at deliveries in recent quarters and to analyze anything management has said about its expectations for deliveries going forward. Unfortunately, Tesla didn't provide guidance for vehicle deliveries in Q3, so forecasting unit sales for the quarter is harder than usual. Still, management has provided enough information and commentary to get a good idea of where deliveries are headed.

One thing is clear: Model X deliveries are soaring. In the fourth quarter of 2015 and the first and second quarters of this year, Tesla delivered 206, 2,400, and 4,638 Model X units, respectively.

Another thing investors can be fairly certain about is that demand for Model X is still well ahead of deliveries. Tesla went into fiscal 2016 with 35,000 deposit-backed reservations for Model X and it has only delivered just over 7,200 units. In addition, the company has only recently began more aggressively marketing Model X, suggested that demand for the SUV remains healthy.

Indeed, at the beginning of last quarter, very few of Tesla's retail stores were even offering test drives of Model X to potential customers. With this in mind, Model X deliveries during Q3 will likely depend on the company's execution at ramping up production and getting Model X into the hands of customers.

Adding this background information on Tesla's rising production and robust demand with some tidbits revealed by management about the company's current and expected production ramp provides a glimpse of the growth in Model X deliveries to expect in Q3. There are three things management has said to consider about production, in particular, that may help with a forecast:

While none of this information is very specific to expected Model X production for the current quarter, it does suggest Model X deliveries could about double this quarter -- especially when these items are considered alongside with Tesla's production ramp of Model X in recent quarters.